By Newsroom on February 17, 2015Comments Off on Forsman & Bodenfors Unveil Campaign for the UN to Stamp out Starvation 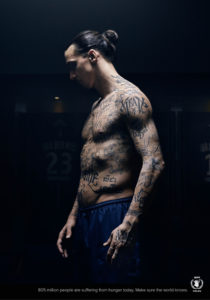 “Each one of the 805 million people suffering from hunger in the world has a name, a voice, a story to share,” said Marina Catena, WFP’s Director for France who initiated this creative partnership with the champion.

The 805 campaign, developed by Swedish agency Forsman & Bodenfors, is all about bringing attention to the names that no one cheers for.

Paris-Saint-Germain (PSG) striker Ibrahimovic, who also captains the Swedish national team, put his talent and fame to the service of WFP to bring to light the reality of those suffering from hunger, whether they are struck by war, natural disasters or extreme poverty. 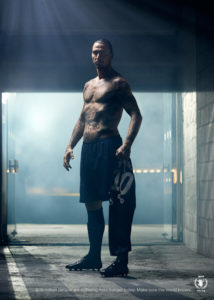 To give voice to these people, Zlatan revealed, during a live football match on February 14, the names of 50 individuals, all suffering from hunger – tattooed to his torso.

“Wherever I go people recognize me, call my name, cheer for me. But there are names no one cares to remember. That no one cheers for: the 805 million people suffering from hunger in the world today. I have supporters all over the world. From now on I want this support to go to the people who really need it. So whenever you hear my name, you will think of their names. Whenever you see me, you will see them,” said Ibrahimović.

The stunt, which earned the Swedish striker a yellow card in the game, has since gone viral with most newspapers and websites supporting Ibra’s shirtless image.

Forsman & Bodenfors Unveil Campaign for the UN to Stamp out Starvation added by Newsroom on February 17, 2015
View all posts by Newsroom →