By Newsroom on September 17, 2013Comments Off on Gary Lineker Hunts ‘Lost’ Ingredients in Walkers Online Game

Walkers ambassador Gary Lineker kicked off an online “ingredient hunt” for the crisp brand in a TV ad airing on Channel 4. Abbott Mead Vickers BBDO created the wider campaign, while Velti was behind the online game, Gary’s Great Ingredient Hunt.

It challenges players to a slot machine-style game where they must match two or three “home grown ingredients” used in Walker’s crisps to win prizes. Players can enter using a code from packets of Walker’s crisps.

Players select three counties on a map of the UK to spin the slot machine wheels in an attempt to match two or more ingredients used in Walker’s core range of crisps, such as tomatoes, cheese and chicken.

Entrants are guaranteed to win prizes from a packet of crisps to the star prize of £10,000 if they match three ingredients. Every day there will be a chance to find Gary Lineker in the grid and win £1,000. 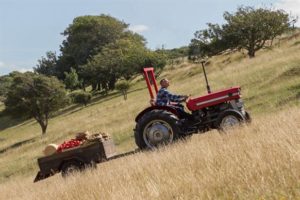 The first TV ad promoting the game aired September 16 on Channel 4, during the episode of ‘Ramsay’s Hotel Hell’ at 10.30pm.

The spot sees Lineker driving through fields on the red tractor seen in previous ads, dropping ingredients as he goes. He also disrupts a cricket game, in a scene that took 40 extras and over 100 tomatoes to film.

Lineker said: “I actually think I’m starting to get the hang of driving this red tractor. I had a few close calls with sheep and extras but I’m happy to report that no one was harmed in the making of this TV ad.”

The game and ad build on the crisp brand’s decision to use only British-grown ingredients for its core range, announced in March.

“By taking part in his hunt, not only can consumers enjoy a delicious packet of Walkers crisps, made with home grown ingredients, but they’re also guaranteed to win one of a whole range of impressive rewards.”