By Newsroom on September 16, 2014Comments Off on Guinness Reveals Life Inside the Brewery in Ad Starring its Staff

Guinness took consumers behind the scenes of its 255-year-old brewery in a new TV ad campaign launched on September 15.

The ad, which is filmed in Dublin, has been directed by award-winning filmmaker Philip Montgomery and narrated by Irish actor Cillian Murphy. It will run across the UK and Ireland until November, supported by social media, digital and PR.

Shot without actors, the ad features Guinness employees in a bid to show the “people behind the beer”.

It is the first part of Guinness’ “In Pursuit of More” series of “mini documentaries” aimed at providing consumers with a behind-the-scenes glimpse of the brewery. It also communicates the fact that the Diageo-owned brand is at the start of a 9,000 year lease of the brewery with the message: “We have a lot more beer to make.” 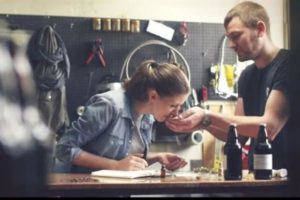 The ad follows a young man cycling to work at Guinness and takes viewers inside the building to show brewers hard at work. It also features a barley farmer who has worked with Guinness for three generations in a bid to communicate its close ties with suppliers.

“St. James’s Gate is a community of people driven by a passion for brewing and advancing the high bar set by previous brewers over two centuries ago,” said Stephen O’Kelly, marketing director for Guinness Western Europe.

“We’re proud of our past achievements and we’re excited about those to come. We felt it was time to open the gates and let the world see the people who make our beer special,” he added.

Guinness Reveals Life Inside the Brewery in Ad Starring its Staff added by Newsroom on September 16, 2014
View all posts by Newsroom →