Hamish Blake, Andy Lee and Lleyton Hewitt are the latest Aussie icons to go head to head in the Uber Eats ‘Tonight, I’ll be eating’ campaign created by Special Group.

The comedic duo and tennis superstar are paired together to celebrate the growing popularity of online food delivery, following research that reveals a whopping 84% of Aussies who order meals with the Uber Eats app are for sharing with two or more people.

This latest series of ‘Tonight, I’ll be eating’ turns viewers into spectators at a match of table tennis between Hamish and Lleyton, while Andy is the umpire. Hamish tells viewers he’ll be having a double cheeseburger and wins a point while Lleyton is distracted with his dinner choice, a banana blossom salad. They cause a racquet over who owns the famous ‘come on!’ cry, but will Hamish tantalise the former number one world tennis champion’s taste buds and take home the trophy? 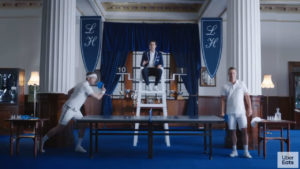 Hamish & Andy commented: “We’re professionals when it comes to not moving from the couch and ordering dinner, so it makes sense that we’ve teamed up with Uber Eats. Our favourite thing about food delivery is that we can pass it off as something we’ve cooked personally if our partners arrive home after the delivery.”

Hewitt added: “Being a regular user of Uber Eats, I was extremely happy being chosen to be part of their new campaign. I really enjoyed last year’s and to have a chance to be part of the new one, especially working with Hamish and Andy, I knew it would be fun. And it was!”

This is the third pairing which follows homegrown Hollywood stars Rebel Wilson with Ruby Rose, and the queen of news Lee Lin Chin with the king of current affairs, Ray Martin, who also get together for a night-in to discover the joys of online food delivery and order meals with the Uber Eats app.

The campaign will be supported by OOH, radio, digital, direct and PR, as well as a host of live social media activations, media partnerships and traffic-read integrations.