By Newsroom on July 30, 2013Comments Off on Heatwave Boosts Ice-Cream Makers After 2012 Washout 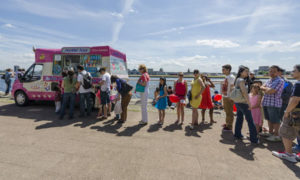 Ice-cream and lolly sales soared by as much as fourfold in the first two weeks of July as the summer weather reached its peak, leaving some shops and suppliers short of stock.

The revival was a welcome boost for an under-pressure industry hit by a dismal 2012 as well as a long-term sales decline. Last year the miserable early summer weather and rising prices meant the volume sold in cones, tubs and stick lollies was down 11% compared with 2007, at 333m litres.

Europe’s biggest ice-cream producer, Yorkshire’s R&R Ice Cream, which makes own-label ice-cream for supermarkets as well as Cadbury and Nestlé products, said production at its factories last week had more than doubled from a month before.

“We’ve had record-breaking sales two weeks in a row,” said Mike Fraine, R&R’s sales director for the UK and Ireland. He said the company had taken on between 20% and 25% more staff than last year, and reported a 300% rise in sales. 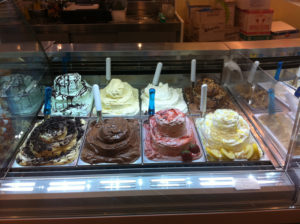 Although retailers typically hold several weeks’ stock of ice-cream in warehouses in preparation for sudden spikes in demand, some popular brands and lines are growing scarce. “As fast as we are supplying ice creams, retailers are running out,” one supplier told the industry trade journal The Grocer. “In some stores I’ve been to, the freezer cabinets look like something out of Beirut.”

The British conglomerate Unilever, which makes popular brands including Walls and Ben & Jerry’s, said it had been forced to draw on its European factories to keep up with UK demand.

Carmarthenshire-based Frank’s, which delivers to most of the major supermarkets as well as public institutions, said sales had doubled. “Staff are working overtime and weekends to keep up with demand,” said the sales director Maria Dallvalle. “This summer weather has been long awaited.”

Sales of ice lollies have been particularly strong. Retailers sold £8.2m worth more lollies in the week to 13 July compared with the same week last year, a 293% improvement. Sorbet sales were up 101% and ice-cream up 90%, according to the retail analysts IRI. 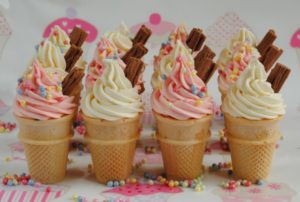 That has helped boost the total value of the market in desserts from the freezer, as lollies are typically 16% more expensive per kilogram than ice-creams. With strong demand, the price of lollies has risen year on year while ice-cream prices are down.

Although the weather has now cooled a little, Tesco neverthless expects to sell 150% more lollies in the last two weeks of July compared with the same period last year.

But despite the heat-induced sales spike, the market research specialist Mintel said underlying diet concerns and the Met Office’s long-term prediction of rainy summers in years to come meant long-term demand for ice-cream was on a downward trend and would fall by 9% by 2017. Sales of “sticks” such as lollies, Cornettos or 99 Flakes have fallen by nearly a third in the past three years amid cool, damp summers.

Tim Eales, director of strategic insight at IRI, said it was too early to tell whether this year’s ice-cream and lolly boom would turn the market around, but it was clear that the last three years of poor weather had suppressed sales.

“We have seen a massive change, more than you might expect to see because of the weather,” he said. “When you’re deprived of sunshine for a while and you suddenly get it, people go mad for it and they are striking while the sun is hot. There is an over-reaction because people want to get outside and enjoy the sunshine.”

Heatwave Boosts Ice-Cream Makers After 2012 Washout added by Newsroom on July 30, 2013
View all posts by Newsroom →