By Newsroom on July 23, 2014Comments Off on Heineken Attempts to Interrupt New Yorkers’ Routine with Mystery Payphone Caller

A payphone on the streets of New York rings and a passer-by tentatively picks it up.

“Listen, I’m inviting you to come across the street,” says the emotionless voice. “That’s terrifying,” the pedestrian answers, unknowingly turning down an invitation to appear on-stage with a renowned US comedian, in a stunt for Heineken. 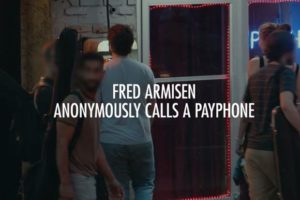 The aptly named “Ringing Payphone” saw just a few people brave enough to not only stop and answer the phone, but to accept the invitation to “come across the street”.

Those who did were invited to appear on-stage with Armisen at the Comedy Cellar club.

The stunt is a “social experiment” being conducted by Heineken as part of its “Cities of the World” campaign. Its aim is to break people out of the conventions of normal behaviour.