By Newsroom on February 14, 2017Comments Off on Heineken Creates Chatbot to Encourage Fans to Watch the Champions League

Heineken is set to launch a chatbot it hopes will convince football fans to tune in to the UEFA Champions League (UCL) during its knock-out stages as part of its official sponsorship drive.

The chatbot will offer fans who turn Champions League matches into social occasions rewards in the form of transportation, food delivery and home cleaning discount codes. The Heineken UCL chatbot will be launched in April via the Facebook Messenger application. 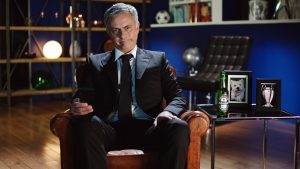 The beer brand has once more tapped Manchester United manager José Mourinho to lead its latest global digital campaign ‘No More Excuses’. The campaign’s launch film will see Mourinho read out some of these reasons fans do not get together to watch UCL matches, and demand that fans turn the football season into a social occasion.

The campaign, created by ad agency Poke London, launches on February 14 and will run for the duration of the UCL League until the final on 3 June. It forms part of the beer brand’s official sponsorship strategy.

Heineken will run a series of social media posts prior to each UCL match week reminding fans to tune in. The content will be posted primarily on Facebook, but will be available on Heineken’s website and YouTube page.

It follows on from Heineken’s TV campaign The Prep Talk that kicked off in September in which Mourinho called on football fans to get together to watch the UEFA Champions League matches.

Heineken Creates Chatbot to Encourage Fans to Watch the Champions League added by Newsroom on February 14, 2017
View all posts by Newsroom →