By Newsroom on August 17, 2015Comments Off on Heineken Gives Fans Chance to Flip the Coin at 2015 Rugby World Cup

2015 will see the tenth Rugby World Cup Tournament taking place in the UK, but rather than become just another official beer of another official tournament, Heineken wanted to use its status as sponsor to give rugby fans an experience they won’t forget.

Dublin-based international creative agency ROTHCO, has developed ‘It’s your call’, a global campaign which will give rugby fans the opportunity to actually take part in the start of every game in the tournament. In an exciting first, fans will be responsible for the coin toss that will determine which nation kicks off the game. Everyone across the world will have the chance to enter a competition to flip the coin at their country’s game and one very lucky fan will flip the coin at the Rugby World Cup final on October 31st 2015.

The global campaign is the first to have been developed by a local market, Ireland for Heineken Global. The development of the campaign is testament to the relationship between Heineken Ireland, Heineken Global and Rothco. Their previous award winning work on Heineken Rugby and their true understanding of the sport and its fans led to the agency landing the brief. All Rugby nations will use and activate the global creative idea in their local markets over the coming months. 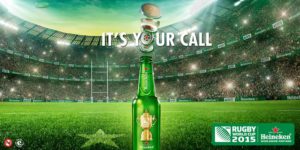 Rothco CEO, Patrick Hickey comments: “It was an incredible honour to be asked to partner our friends in Heineken in the production of the Rugby World Cup work and we are delighted with the outcome”.

The campaign kicks off in Ireland on 15th Aug (during the Ireland vs. Scotland match) with the global TVC directed by Reynald Gresset of Partizan. In true Heineken style, a unique soundtrack covers the fast-paced adventure of the opportunistic lead who adventures through London at breakneck speed to deliver the official coin to the referee in time for the Rugby World Cup Final. But there’s no direct route of course. The coin bearer cheekily, yet charmingly wangles some priceless moments with rugby officials along the way, not to mention bumping into all-time Rugby legend, John Smit and former All Black’s player Jonah Lomu.

To accompany the TVC, thousands of coins are being minted to give rugby fans in each participating country the chance of flipping the coin at their nations game. The competition will begin in Ireland and will be adapted in territories across the world.

Heineken Gives Fans Chance to Flip the Coin at 2015 Rugby World Cup added by Newsroom on August 17, 2015
View all posts by Newsroom →