By Newsroom on April 16, 2013Comments Off on Heineken Ignite: Interactive LED Beer Bottles

The beer drinking experience is already fairly interactive. You open bottles, clink them against your friends’ bottles, and dress them up in little cozies to keep them cold.

Apparently, all that wasn’t enough for Heineken, which unveiled a prototype of its new Heineken Ignite bottle last week at Milan Design Week.

The bottles incorporate LEDs, micro-sensors, and wireless networking. The technology can detect when the bottle is just sitting there, when a person is drinking, and when it’s used for cheering. Various actions are set to trigger the light effects, or it can be remotely activated to flash in time with music. 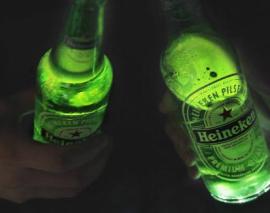 Here’s a deeper dive into the tech behind the smart bottle:

The housing under the bottle gives room to a custom-designed circuit board based around the open-source Arduino hard- and software platform. It features eight bright LEDs, an efficient 8-bit microprocessor, an accelerometer to detect various motion types, and a wireless network transceiver to communicate with the outside world.

The innards are kept in a reusable 3D-printed housing.

When it comes to advancing beer bottle technology, the Heineken Ignite is much more about flash than function. All those sensors and wireless networking doesn’t make it very practical for home use, but it could really catch on in big clubs if Heineken decides to roll the bottles out more widely.