By Newsroom on March 17, 2016Comments Off on Heineken Stages ‘Don’t Let Your Friends Down’ Champions League Stunt

Heineken has used the access it gets as a Champions League sponsor to create a short, prank-style film about ditching watching the match round your friend’s house when you get a ticket to the game. 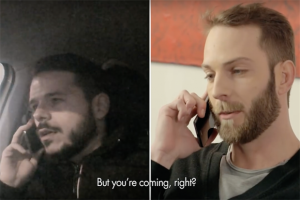 ‘The Dilemma’ follows Simone, an Italian fan who normally watches the football with his friends but avoids their calls after he gets given a VIP ticket to watch Roma play Real Madrid.

But he is surprised when they appear on the stadium’s big screen and talk to him over the PA to tell him to leap into a helicopter Heineken has laid on and come round and watch the game with them instead.

After the rest of the crowd starts booing him he decides to go – but there’s a surprise ending.

Heineken Stages ‘Don’t Let Your Friends Down’ Champions League Stunt added by Newsroom on March 17, 2016
View all posts by Newsroom →