By Newsroom on August 19, 2013Comments Off on ‘Invigorating’ Designs For Health Drink Start-up Vivid 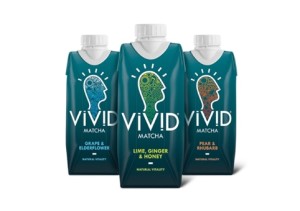 BrandOpus has created the branding and packaging for Vivid, a new ‘super-food’ soft drink start-up.

Vivid is created from matcha, a ground powder originally from Japan that Vivid claims to be ‘energising’, ‘clarity-bringing’ and high in antioxidants. BrandOpus says this is the ‘first Matcha drink developed for the on-the-go consumer’.

The consultancy’s designs for Vivid aim to echo the product’s abilities to make drinkers ‘Think Vivid’ and stimulate the mind using bright colours, according to BrandOpus.

A graphic of a patterned ‘active’ head pictured in profile looks to reinforce the idea of mental stimulation.

Different coloured heads denote the different variants in the range, which include grape and elderflower; lime, ginger and honey and pear and rhubarb.

Paul Taylor, executive creative director at BrandOpus, says, ‘The brand identity establishes a metaphor for the effect that matcha has on your mind. This acts as a shortcut for consumers to understand what makes Vivid different to its competitors’.

James Shillcock, Vivid Drinks founder, adds, ‘We’ve got a pack that asserts our unique space in the lifestyle and health drinks market’.

Vivid launches this month in As Nature Intended, Whole Foods Market and Planet Organic stores throughout the UK.