By Newsroom on February 21, 2018Comments Off on Irn Bru Courts Controversy with Cheeky Ad Urging Viewers ‘Not to Be a Can’t’

AG Barr’s Irn Bru is looking to build upon its cheeky legacy with a risqué ad that urges drinkers not to be a “can’t”.

The 40-second spot appears to make a brave play on the c-word. It echoes the brand’s infamous ‘Fanny‘ ads which provoked a string of complaints to the Advertising Standards Authority (ASA). 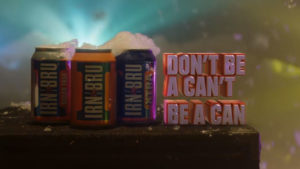 The ad, dubbed ‘Parents’, shows a young man called Dave meeting his girlfriend’s family. An unhappy father-in-law is shown asking him: “when are you going to marry my daughter?”

Dave asks to leave before exclaiming: “Don’t be a can’t, you need a can.” He and his girlfriend then escape to a foam party where they find they have been accompanied by her mum and the family dog Eric.

The ad is reminiscent of an an old BBC Scotland Chewin’ The Fat sketch, but it is not Irn Bru’s first excursion into the mischievous.

Adrian Troy, marketing director at A.G. Barr said: “This new campaign for Irn Bru was borne out of a lengthy process that started with understanding youth consumers in their world today. Our research highlighted that young people lived in a very serious world, but that sometimes they just wanted to escape it, be a bit less ‘adult’ and have a bit of fun. We are turning a negative situation into a positive one, encouraging our consumers to think positive and be positive” 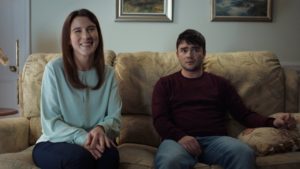 Ed Brooke, head of Leith, said: “Following on from a successful campaign like Gets You Through was always going to be a challenge but “Don’t be a can’t, be a can” feels like a natural next step for the brand. It’s full of the Irn Bru personality that drinkers young and old have come to expect and is rooted firmly in a truth that our target audience like to take a break from the serious stuff now and then.”

The Cumbernauld-based brand, a long time partner of the Leith agency, turned heads in 2012 after running a commercial where a newborn baby was named Fanny. Much like the call to action in ‘Parents’, an irked man cracks open a can, proving that ‘Irn Bru Gets You Through’.

The campaign will only run in Scotland, planned by phd North.

It draws attention to the brand’s new lower sugar blend, which was launched to circumvent losses that would have been propagated by the sugar tax.

Irn Bru Courts Controversy with Cheeky Ad Urging Viewers ‘Not to Be a Can’t’ added by Newsroom on February 21, 2018
View all posts by Newsroom →