By Newsroom on September 15, 2016Comments Off on IT’SUGAR Makes Mischief this Halloween with its Most Spine-Chilling Campaign

IT’SUGAR, the sweet experiential candy retailer, revealed its most frightening Halloween campaign yet: One Scary Election.

As the 2016 US Presidential election heats up and continues to spook America, IT’SUGAR retail locations nationwide will be getting into the Halloween spirit to celebrate the “candy-dates.”

Along with not-to-be-missed window displays at IT’SUGAR stores, One Scary Election will give customers the opportunity to purchase various exclusive products inspired by Donald Trump and Hillary Clinton: “Trump or Treat” and “Hilloween” candies.

The truly unique, and similarly-hued Donald Trump will be represented, appropriately, as a pumpkin, while the wickedly ruthless Hillary Clinton will find her home as a witch. Candy connoisseurs alike can eat away their sorrows about the future of the country with a “Hilloween” Candy Corn Box or a “Trump or Treat” Candy Pumpkin Box. 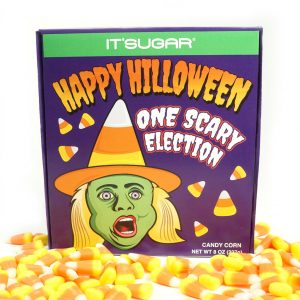 “At IT’SUGAR nothing is off limits, and the upcoming election is certainly no different,” said Jeff Rubin, founder and CEO of IT’SUGAR.

“With One Scary Election this Halloween, IT’SUGAR will hopefully provide our customers with a much needed laugh as the sometimes frightful campaign trail continues.”

Known for its outlandish sweets and irreverent merchandise offerings, IT’SUGAR has no plans to slow down this hair-raising holiday season. Feel like impersonating the devilish Donald Trump?

Get into character with the Trump Giant Lollipop – a sweet confection molded into Trump’s infamous coif. Outside of the edible treats, customers can also get a hold of Hillary action figures, Hillary and Trump Toilet Paper, Trump Sunglasses, Hillary and Trump Socks and a Hillary Bop Bag. 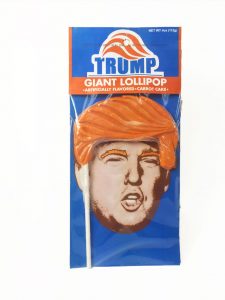 Consumers can join IT’SUGAR as America heads to the figurative grave when One Scary Election opens to the public on Wednesday, September 14.

So grab a pitchfork, heat up that caldron and join IT’SUGAR to show America which candy-date scares this country the most.

Want to cast your official ballot? Head here to place your vote and receive a 10 percent coupon code for use online or in-store.

IT’SUGAR Makes Mischief this Halloween with its Most Spine-Chilling Campaign added by Newsroom on September 15, 2016
View all posts by Newsroom →