By Newsroom on December 5, 2014Comments Off on Johnnie Walker to Give 250,000 Kilometres of Safe Rides Home Across the World

As part of the Johnnie Walker global responsible drinking programme, Join the Pact, the world’s leading Scotch Whisky said it was giving away 250,000 kilometres of safe rides around the world during the festive season to encourage people not to drink and drive. 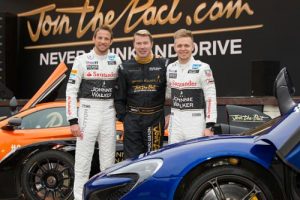 In Edinburgh Mika Häkkinen, former Formula 1 driver and Johnnie Walker Global Responsible Drinking Ambassador, came together with 2014 McLaren Mercedes Formula 1 drivers Jenson Button and Kevin Magnussen to help launch the campaign which will run in Edinburgh and in over 60 other cities across the globe.

Join the Pact has already gathered commitments from more than 1.4 million people to never drink and drive and in September, Johnnie Walker announced a goal of securing an additional five million personal pledges over the next four years.

During the festive season Johnnie Walker will help people get home safely through a variety of initiatives with local transport providers. Johnnie Walker is partnering with Edinburgh‘s Lothian Buses to provide free bus services for revellers returning home from the city’s Hogmanay event on New Year’s Eve. 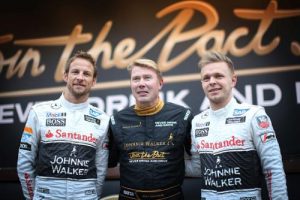 Speaking at the launch David Gates, Diageo Global Head of Premium Core Brands, said: “The involvement of Johnnie Walker in Formula 1 through our partnership with McLaren Mercedes has given the brand a credible platform to run a powerful responsible drinking programme that has made real impact on a global scale. This has been ongoing for almost a decade and our recent arrangement with Formula One group to become the Official Whisky of Formula 1 will allow us to expand the programme into new territories.”

“Our appeal to Join the Pact to never drink and drive is never more relevant than when millions of people around the world are planning to relax and enjoy the holiday festivities. Through activations of the programme in over 60 cities over the next few weeks, we hope to provide in the region of 250,000 kilometres of safe rides home. At Diageo, we take our commitment to the promotion of responsible drinking very seriously.  We really hope that everyone joins the Pact and makes that public commitment this festive season,” added David. 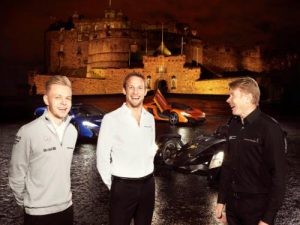 In a joint message issued from today’s event, Johnnie Walker Global Responsible Drinking Ambassador Mika Häkkinen, along with Jenson Button and Kevin Magnussen, said: “We each know that driving a Formula 1 car is about staying in control, all of the time. Join the Pact is a commitment to staying in control and putting the safety of yourself, your passengers and other people ahead of everything else. It’s a choice that guarantees that everyone can enjoy their festivities and get home safely – we appeal to you to make that choice and Join the Pact to never drink and drive.”

Johnnie Walker to Give 250,000 Kilometres of Safe Rides Home Across the World added by Newsroom on December 5, 2014
View all posts by Newsroom →