In the film, to air on TV and in cinemas, the star of the film is the ‘Bubblophone’, an ingenious invention that reveals how AERO might pump uplifting music into chocolate to create their deliciously bubbly bubbles. 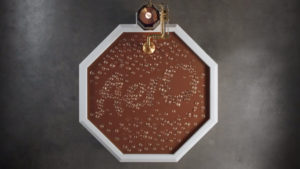 Instead of relying on special effects all the bubbling ‘chocolate’ was captured in camera requiring months of tests and fine-tuning, reflecting the care and craft that goes into making every AERO bar. Post-production was handled by Time Based Arts, and edits by The Assembly Rooms.

The brass-based track was inspired by the big band music of the 1930s and composed by SoHo Music. then the bubbly action was synced to perfection during the one day shoot. The track was then recorded with a live band at Angel Studios to maximise its toe-tapping energy.

The film was directed by Chris Cairns through Partizan, known for his passion and expertise for orchestrating visual effects and music, and having directed notable campaigns for Coca Cola, Swatch, Mini and Pizza Hut to name a few, and a passion to create the perfect audio-visual experience ever since. 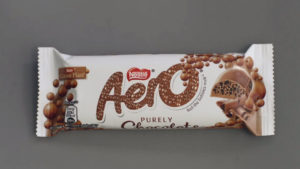 Jo Wallace, Creative Director at J. Walter Thompson London commented: “Capturing the bubbles for real, in camera, was as complex and challenging as the idea is beautifully simple. The team, like the best bubbles, all rose to the occasion and their incredible attention to detail has resulted in a stunning piece of bubbly magic.”

Rachael Brown, AEROSenior Brand Manager at Nestle said: “This film is as beautifully crafted as AERO bubbles themselves. A wonderfully simple idea that perfectly conveys the light and bubbly quality of AERO chocolate. Having not advertised this iconic bar in some time, this is perfectly celebratory and delicious!”

Jeremy Little & James Hobbs, Creative Team at J. Walter Thompson London added: “We wanted to introduce the Bubblophone with a big brass bang. The ambition was to make AERO feel iconic again and create a piece of film that feels as bubbly as eating AERO chocolate. Building a Bubblophone, making bubbles with music, these are great reasons to come into work.”