By Newsroom on November 21, 2017Comments Off on Kellogg’s Visits the North Pole to See How Santa Eats His Corn Flakes

Kellogg’s throws its hat into 2017’s battle of the Christmas ads – asking Mr and Mrs Claus how they eat their Kellogg’s Corn Flakes. 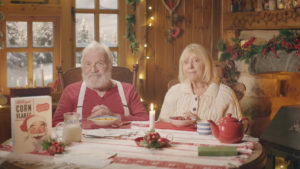 As part of the #MyPerfectBowl campaign by Leo Burnett London, which asked the UK and Ireland to describe their perfect bowl of Corn Flakes, Kellogg’s has visited Santa and his elves to ask the all-important question.

Adding a cold milk, a sprinkle of orange zest, and a dash of cinnamon, Father Christmas asks ‘what’s your perfect bowl?’

The festive breakfast aired on November 20, during ITV’s Emmerdale.

Kellogg’s Visits the North Pole to See How Santa Eats His Corn Flakes added by Newsroom on November 21, 2017
View all posts by Newsroom →