By Newsroom on July 4, 2018Comments Off on KFC Announce the Return of ‘Double Down’ Bun-Less Burgers with New Campaign

KFC has confirmed the Double Down is making its long-awaited return to the menu with an integrated campaign from Mother, Blue 449, Freuds and Iris.

The Double Down was heralded as a revolutionary ‘game changer’, the ‘bun-less burger of dreams’ features crispy bacon, melted cheese and barbeque sauce, all sandwiched between two Original Recipe chicken fillets. But to keep things fresh, KFC has confirmed the Double Down will only be available in restaurants for 21 days. 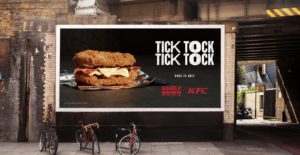 The countdown, iconic Double Down and glitch visual are used extensively across marketing of the Double Down’s return. Linear TV will feature the live countdown highlighting how long the Double Down is available in the UK. Fans can also keep checking in with CanIGetADoubleDown.com to find out how long is left to snap up a delicious Double Down.

The UK public have been whipped up into a frenzy of anticipation, with hints and clues spread through social media in advance of the launch with host of content with influencers and partnership with Unilad.

KFC Announce the Return of ‘Double Down’ Bun-Less Burgers with New Campaign added by Newsroom on July 4, 2018
View all posts by Newsroom →