KFC Jumps on Board the Gravy Train with Meaty Cocktails

By Newsroom on January 17, 2018Comments Off on KFC Jumps on Board the Gravy Train with Meaty Cocktails

KFC might be best known for its ‘Finger Lickin’ Good’ chicken but the colonel isn’t one to rest on his laurels, hence a promotional push from the brand to put its gravy side dish front and centre of its menu.

Based on the notion that its savoury sauce is so good you can drink it KFC have ran with it to launch a TV campaign depicting a range of cocktails reimagined with your favourite meat juices as the chief ingredient.

Created by Mother to promote the KFC Gravy Megabox the promotional push introduces the world to a range of never before seen mud brown drinks such as The Gravy Mary – ‘it’s bloody good’; The Southern Twist – ‘it’s all gravy, baby’ and The Fingerlickin’ Sour – ‘a sweet ride on the gravy train’. 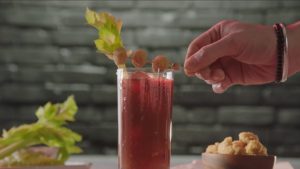 Professional mixologist Patrick commented: “When KFC came to me with the idea of creating genuine gravy cocktails, based on the growing trend of stocktails, I just couldn’t resist. The key was to find flavours and ingredients which perfectly complimented the distinctive taste of KFC gravy. For example, the Kentucky bourbon in The Southern Twist brings mellow, sweet spice notes to stand up against the savoury gravy. The herbal note of parsley on the rim brightens the sip with the brown sugar softening the kick of bourbon and uniting the flavours.”

Marion Racine, marketing manager at KFC UK & Ireland added: “Our fans repeatedly express their love for our gravy, which always sparks ideas within the team. We know our gravy is good enough to drink – so with stocktails being a real hit at the moment, what better ingredient to take them to the next level?”

KFC gravy is available in all 900 of the fast food restaurant’s UK and Ireland outlets, although if you’re brave enough to sample its ‘stocktails’ you’ll have to do your own mixing at home.

KFC Jumps on Board the Gravy Train with Meaty Cocktails added by Newsroom on January 17, 2018
View all posts by Newsroom →