KitKat at 80: How ‘Moment Marketing’ Helped it Conquer the Digital World

By Newsroom on August 28, 2015Comments Off on KitKat at 80: How ‘Moment Marketing’ Helped it Conquer the Digital World

Few 80-year-olds can claim to be trendsetters in the digital age, so how has a brand celebrating its eighth decade managed to take social media by storm?

Launched in 1935, KitKat, with its trademark red wrapper and chocolate fingers, has not just stood the test of time, it has never stopped moving with it.

Named the most influential candy bar of all time by Time magazine, this wafer-filled chocolate treat has defied eight decades of changing business environments and consumer mindsets to become one of the world’s top ten fast-moving consumer goods brands in social media.

Its secret? Its strong brand equity and its knack for leveraging ‘moment marketing’ – the ability to move fast and leverage topical or news events.

Ever since 1938, KitKat has been associated with having a break. Its classic tagline ‘Have a Break, Have a KitKat” has been synonymous with the brand for almost 60 years.

Because more and more people are taking their breaks differently, such as getting online when they have a free moment, KitKat understands the need for having a strong digital presence.

The tipping point for its success as a digital brand came when the team began to use ‘moment marketing’ to engage with consumers online.

It all started in 2012 when Red Bull signed up Austrian daredevil Felix Baumgartner for a record breaking skydive from the stratosphere, more than 20 miles above the surface of the earth. It would make him the first person to break the speed of sound in a freefall. But Felix had to postpone the jump several times due to bad weather.

As suspense grew online, KitKat decided to offer Felix some moral support with a humorous Facebook post: “It could be a long wait Felix…have a break, have a KitKat.”

The post was an instant viral success and we didn’t want it to stop there” says Nestlé’s Global Head of KitKat Stewart Dryburgh. The team began brainstorming for other fun breaks for Felix and the Red Bull team while they waited for the weather to clear.

The answer? Send KitKat into space.

Orchestrated in record time – less than 24 hours after the idea was hatched KitKat made its ascent strapped to a weather balloon and a Go-Pro camera.

The footage was uploaded onto YouTube and quickly spread across Facebook and Twitter with the hashtag #BreakFromGravity, receiving more than 6.5 million views on Facebook and 10 million impressions on Twitter. Red Bull acknowledged the viral stunt by tweeting “KitKat, thanks for the support!”

Bringing the KitKat Personality to Life

“This was the first time two brands were interacting online and we started to think – what other brands would we like to talk to? Who would KitKat like to hang out with?” says Stewart.

The team decided to use ‘moment marketing’ and interacting with other brands online as a new way of bringing the KitKat brand personality – which Stewart describes as fun, empathetic and playful – to life.

The next opportunity came in early 2013 when chocolate lover Laura Ellen tweeted at her two favourite brands: “Can tell I like chocolate a bit too much when I’m following KitKat and Oreo.”

KitKat immediately challenged Oreo to a public game of noughts and crosses, made up of KitKat fingers and Oreo cookies, in a bid to win Laura’s affections.

The next morning saw a good natured response from the cookie brand, showing the KitKat fingers ‘cross’ half eaten, with the tweet “sorry KitKat, we couldn’t resist…#GiveOreoABreak.”

The playful online banter between the two big confectionery brands received a huge amount of social media attention – gaining more than 25 millions impressions – and is still used as a case study across the world on how to bring brand personalities to life.

“Going digital has helped KitKat engage with its consumers in a more intimate way than ever before” says Stewart. “These two big online successes with Red Bull and Oreo helped prepare us for our biggest collaboration to date – our tie-up with Google for Android KitKat.”

For the Love of KitKat

“We were looking for the next brand to ‘play’ with when Google contacted us with their proposal” says Stewart. “We knew Google was looking for a sweet-themed name under the letter ‘K’ for their next Android system, but because all the previous ones were generic – such as cupcake and doughnut – no one expected it to be a brand.”

With a speed that had now become characteristic for KitKat, the tie-up was approved within 30 minutes of discussion by the Nestlé team. “It just goes to show that big companies can move fast too” says Stewart.

The collaboration has proved to be KitKat’s most successful digital and creative branding campaign to date, but what the team prizes the most is why KitKat was chosen in the first place.

“One reason why Google invited us to share our name with their Android system – making us the first brand in the world to do so – was simply because their engineers were huge KitKat fans. It was pure love for the brand” says Stewart. “No money ever exchanged hands. If that’s not a mark of how loved and relevant KitKat continues to be, I don’t know what is.” 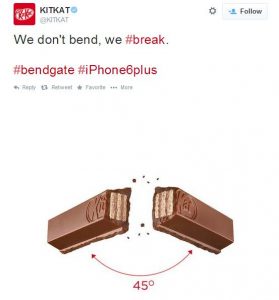 KitKat continued to dominate social media in 2014 when it jumped into chatter around what became known as Apple’s “#bendgate” with the tweet ‘We don’t bend, we #break”. The hashtag #bendgate had begun trending on Twitter after people started complaining that the Apple iPhone 6 was bending in their pockets.

The post was retweeted more than 28,000 times, gaining KitKat thousands more followers and more than 10,000 ‘favourites’.

“The last five years have brought us unprecedented success as a digital brand and we’ve been quite good at keeping the momentum going every year. Now we’re looking at what we can do to break new ground and stay ahead” says Stewart. “We’re going to give people more reasons to have a break with KitKat.”

KitKat at 80: How ‘Moment Marketing’ Helped it Conquer the Digital World added by Newsroom on August 28, 2015
View all posts by Newsroom →