By Newsroom on October 26, 2015Comments Off on KitKat’s Spectre Ad Urges Bond To Have A Break From All Those Ladies 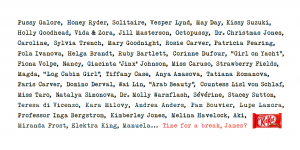 To mark the release of the latest Bond film KitKat have launched a new ad campaign which plays on the ladies’ man image of the iconic spy while also using the brands famous catch phrase.

KitKat have created a poster which lists every bond girl featured in the film series including Pussy Galore, Mary Goodnight and Elektra King. The list concludes that Bond may need some respite from wooing so many ladies with the suggestion, “Time for a break, James?”

The ad has been launched to coincide with the release of Spectre on October 26 and will appear in press, on a 48 sheet poster site in Camden and on a digital projector display on the platform at Oxford Circus tube station next to an official poster for the film.

Ad agency J. Walter Thompson London created the campaign which plays on KitKat’s 80 year old end line of “Have a break, have a KitKat.”

Alex Ball from JWT said KitKat “felt it only right to offer one of the world’s longest serving spies a little break from the arduous and often physically exhausting tasks he is forced to undertake for Queen and country.”

KitKat’s Spectre Ad Urges Bond To Have A Break From All Those Ladies added by Newsroom on October 26, 2015
View all posts by Newsroom →