Byron Hamburgers, relaunched a range of special burger and beer combinations to mark their 10th birthday and approached Loco’s creative team to come up with a concept and production approach to shoot 4 separate pieces for their social media channels. 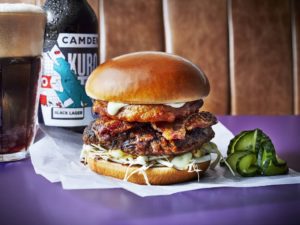 Loco’s Dave Waldman edited the short pieces and colourists Kenny Gibb and Jon Davey provided the colour grades for the films. The production team also sourced quirky soundtracks to highlight each of the burger video’s themes.

The first video to launch featured The Ronaldo and a Fourpure Brewing Company pilsner which quickly gained over 300 thousand Facebook views and some brilliant comments from fans reportedly drooling in response to the videos. The next videos feature the Roquefort, Bunzilla and finally – their hero core burger: Byron.