By Newsroom on April 23, 2018Comments Off on Maltesers’ Diversity Ads Are Back, Featuring Hot Flashes and Lesbian Dating

British candy brand Maltesers proved once and for all that diversity initiatives don’t have to be tear-jerking, inspirational or maudlin affairs when it launched its disability-focused campaign in 2016. The initial spots, launched around the Paralympics, centered on lighthearted scenarios that made the actors’ physical conditions part of the joke without being the butt of the joke.

Now London agency AMV BBDO is back with two new spots, this time moving beyond disability to tackle what it describes as “taboo topics” that rarely arise in advertising—specifically menopause and lesbian dating. The campaign, which began as part of a Channel 4 free-airtime partnership called “Superhumans Wanted” (a reference to the network’s stellar “We’re the Superhumans” spot), is now called “Celebrating Similarities.”

“The adverts recreate real-life situations faced by women from different groups in society who you don’t often see or hear from,” Michele “Mitch” Oliver, marketing vp for Mars Chocolate UK, says in a statement. “We’re telling their stories to help combat perceived stereotypes and celebrate our similarities, whilst at the same time hopefully making people smile.”

Inspired, like the previous ads, by real stories, the spots were created in consultation with advocacy groups Age UK and Stonewall, which provided feedback and focus groups. 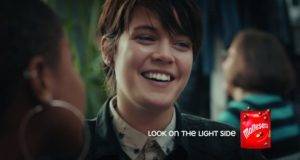 were keen to talk to women who are so often misrepresented in advertising,” says AMV BBDO creative director Michael Jones. “Many, including women in the 60-plus bracket, are not only misrepresented, they’re often completely ignored by advertisers—their depiction completely cemented in cliché—which is crazy. We met so many entertaining women and heard so many funny, outrageous stories. We were inspired. These women should get their own TV shows, let alone some air time in an ad for such a well-loved brand.”

Maltesers’ Diversity Ads Are Back, Featuring Hot Flashes and Lesbian Dating added by Newsroom on April 23, 2018
View all posts by Newsroom →