By Newsroom on August 6, 2013Comments Off on Marmite Returns to UK Screens as Part of £2 Million Campaign

The Unilever brand Marmite has unveiled a new strapline and its first TV ad in two years as part of a £2 million campaign.

The “Love it. Hate it. Just don’t forget it” campaign aims to reinvigorate the brand’s popularity in the UK.

The 90-second spot, which launched on August 5, spoofs animal-rescue documentaries. It features Marmite Rescue Teams around the country, saving neglected jars of Marmite from the backs of people’s cupboards. 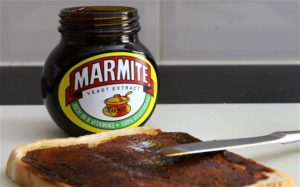 The ad will run until 6 October, and will be supported by outdoor, digital, experiential, PR and social media executions.

Adam & Eve/DDB was behind the campaign, which was created by Nick Sheppard and Tom Webber, and directed by James Rouse. The media planning and buying agency was Mindshare.

Joanne O’Riada, the brand manager for Marmite, said: “Our new ‘Love it. Hate it. Just don’t forget it’ strapline builds on our iconic ‘Love it. Hate it’ positioning to create a campaign that remains true to Marmite’s light-hearted personality.

“Even better, not only is Marmite back on television screens for the first time in two years, we’re also going live just as our Facebook page has reached an impressive one million ‘likes’.”

Marmite’s previous TV campaign, launched in July 2011, was created by DDB UK (now merged into Adam & Eve/DDB) and pitted the yeast extract as the antithesis of pretentious food.

Marmite Returns to UK Screens as Part of £2 Million Campaign added by Newsroom on August 6, 2013
View all posts by Newsroom →