By Newsroom on August 30, 2018Comments Off on McCann Prague Takes an Olympian, a Pop Star & Instagrammers on a Carefree Summer Road Trip for Coca-Cola

McCann Prague has devised a creative concept for probably the first Instagram campaign with a TV trailer in the Czech Republic. The aim of the campaign is not only to promote the competition for so-called ‘WOW experiences’, but also to make Coca-Cola more attractive for Czech and Slovak teenagers.

With this goal in mind, the film centres on a summer road trip taken by Czech Olympic gold medalist Ester Ledecká and Slovak singer Emma Drobná, with selected influencers, as they create content for social networks along their journey. Working with these figures, Coca-Cola is ensuring it stays relevant to young audiences. Naturally there is also strong point of sale promotion.

The task of the agency was to introduce this road trip as well as the mechanics of the competition to the target group. So they came up with the “Shall we fly?“ campaign, which combines that summer carefree feeling with the main prizes on offer in the competition (a balloon flight, parachute jump, etc.) and which takes the form of a TV spot used as a social network trailer. 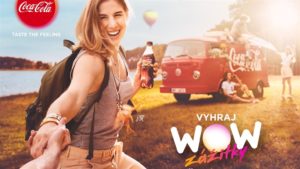 The campaign started with a TV teaser in square format, with most of the screen filled in with just a black background. The fact that the teaser was basically “shot” by the Instagrammers @hynecheck and  @ondrejduffek is just the icing on the cake.

The biggest problem was synchronising the schedules of the Coca-Cola ambassadors – Ester Ledecká and Emma Drobná, who are the main stars of the TV spot, for at least one day.

Jan Benda, Group Creative Director at McCann Prague, who was in charge of the idea for the campaign, said: “We are grateful for the maximum effort of the whole staff, especially to director Marek Partyš, Bistro Films production, the client and, of course, both ambassadors for the fact that we were able to create enough material for formats from six-second bumpers to 60-second cinema spots in an extremely short time. Whoever witnessed Ester and her energy probably has no doubt that she’ll win the Olympic medal again. And perhaps even in two years in Tokyo.”

The campaign will run throughout the whole summer in the Czech and Slovak Republics primarily on social networks, online media and TV. The 10-second TV teaser will be followed up by 30- and 60-second TV spots and cinema spots accompanied by shorter videos and other online formats. The content portion of the social networking campaign runs concurrently with it.

McCann Prague Takes an Olympian, a Pop Star & Instagrammers on a Carefree Summer Road Trip for Coca-Cola added by Newsroom on August 30, 2018
View all posts by Newsroom →