By Newsroom on March 10, 2016Comments Off on McDonald’s Ad Showing A Young Man Coming Out Goes Viral

A McDonald’s ad in Taiwan that features a young man coming out to his father as gay has gone viral.

The ad by Leo Burnett Taiwan, opens with a father and son sitting in silence in McCafé.

The tense young man has written a note on his cup: “I like guys.” The father stands up and walks away, apparently enraged. However, he soon returns to write additional characters on his son’s cup, so it reads: “I accept that you like guys.” 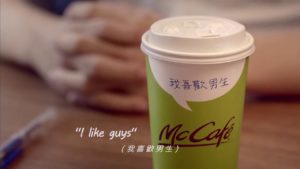 The 90-second video, entitled “Acceptance”, is part of a campaign to encourage people to open up and express encouragement, love and apology, over a cup of McCafé coffee.

The video has been viewed more than 1.3m times on YouTube.

The ad has caused some backlash in Taiwan, with the Alliance of Taiwan Religious Groups for the Protection of Family reported to have urged people to boycott McDonald’s in response.

McDonald’s Ad Showing A Young Man Coming Out Goes Viral added by Newsroom on March 10, 2016
View all posts by Newsroom →