By Newsroom on January 13, 2015Comments Off on M&M’s New Ad Celebrates Fans Who Refused to Let M&M’s Crispy Disappear

M&M’s Crispy Milk Chocolate Candies are back, and the brand is telling all the fans. Even the oscillating, folding and ceiling variety.

On Sunday, Jan. 11, Mars Chocolate North America debuted a new TV commercial for M&M’s Crispy, which are returning to shelves for the first time in a decade after countless pleas from consumers. The 15-second spot features the M&M’s Brand character Red instructing his fellow “spokescandy” Yellow to “tell our fans” that M&M’s Crispy are back. Yellow takes the cue literally, spreading the message to a series of inanimate fans – oscillating, folding and ceiling – inside the M&M’s Brand offices.

The spot, which debuted during the telecast of the 2015 Golden Globes on NBC as well as online, is a humorous celebration of the product’s loyal fans, who in the 10 years since M&M’s Crispy left shelves made it the No. 1 Mars variant no longer on the market requested to be “brought back.” 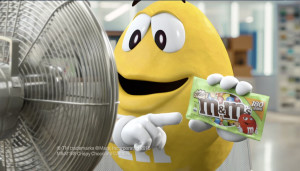 “Our fans are the ones who convinced us that M&M’s Crispy are so good, we just had to bring them back,” said Seth Klugherz, Senior Director, M&M’s Chocolate Candies. “We’re so excited to celebrate the return of M&M’s Crispy in such a big way, and this new commercial is both a celebration of our existing fans and an invitation for an entirely new generation of consumers to try this delicious product.”

The launch of M&M’s Crispy is the biggest M&M’s Brand launch since the introduction of M&M’s Pretzel Chocolate Candies in 2010. M&M’s Crispy were first available as a limited-edition item in 1998, and they stayed on shelves until 2005.

The new commercial was created by BBDO New York.