By Newsroom on March 30, 2016Comments Off on M&M’s Invites America to Vote for the Newest Peanut Flavour 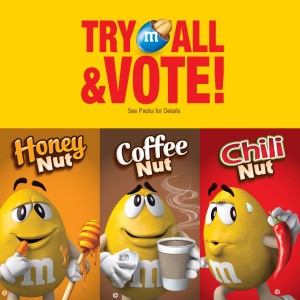 The search is on for the next great peanut – M&M’S Peanut that is. In honour of their 75th anniversary, M&M’s is empowering fans to choose the brand’s newest peanut–flavoured addition to its iconic line-up in a nationwide “Flavour Vote.”

M&M’s Peanut – which became an instant classic when it was first introduced in 1954 – will be joined on shelves with a new peanut flavour this fall. Three new, nut–inspired challengers – Honey Nut, Coffee Nut and Chilli Nut – will go head-to-head vying for America’s hearts and stomachs and to win the coveted position of sitting side-by-side with M&M’s Original Peanut.

Fans of the brand will be able to purchase and taste each of the new flavours for themselves via retailers nationwide and then cast their vote, once a day until June 17 here or by texting the word “Vote” to 87654.

“At Mars Chocolate North America, we know M&M’s would not be the brand it is today without our fans,” said Tanya Berman, Director, M&M’s Brand. “As we celebrate our 75th Anniversary, ‘Flavour Vote’ is the perfect opportunity to say thanks by empowering them to write the next chapter in our brand’s colourful history by choosing the newest M&M’s Peanut flavour.”

Once fans cast their vote for their favourite new M&M’s Peanut flavour, they are entered for the chance to win $100,000 and earn the title of the official M&M’s Taste Tester. The winner will be announced in August along with the winner of the ‘Flavour Vote,’ which will remain on retailer shelves nationwide.

The brand expects to see a “colourful” but friendly competition put on by all of the “Flavour Vote” campaign participants and encourages fans to rally for their favourite using the hashtag #MMSFlavorVote.

M&M’s Invites America to Vote for the Newest Peanut Flavour added by Newsroom on March 30, 2016
View all posts by Newsroom →