By Newsroom on February 27, 2017Comments Off on M&M’s Invites Fans to Star in the Brand’s Next Commercial

Colourful chocolate candies and catchy beats have never been remixed like this. On February 26, the M&M’s brand will bring together its iconic spokescandies with Incredibox beatbox technology in a new, musically-inspired commercial that is sure to generate buzz. And, now, M&M’s is looking to its fans to get involved by recording their own bite-size beats for a chance to be featured in an upcoming TV commercial. 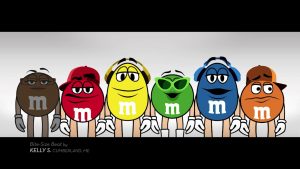 Fans are encouraged to visit bitesizebeats.com to record their own beat by running the band of M&M’s spokescandies turned beatboxers. Anyone can participate – it’s as easy as adding fun accessories to your favourite colourful characters and using pre-mixed effects, melodies and voices to create one colourful beat. Fans can then share their new creations on their social channels and check out beats created by other users.

“We wanted to get fans more involved with the M&M’s brand by giving them a voice in our iconic TV commercials,” said Tanya Berman, Director, M&M’s Brand. “This program, which relies on user-generated content, is just another example of how we are continuing to find new and innovative ways to connect with M&M’S fans around music.”

Top consumer beats will be featured in upcoming M&M’s commercials or on M&M’s social media channels. To enter, simply save your beat to the site and we encourage you to use the hashtag #bitesizebeat to share with your friends on Facebook or Twitter.

M&M’s Invites Fans to Star in the Brand’s Next Commercial added by Newsroom on February 27, 2017
View all posts by Newsroom →