By Newsroom on February 13, 2018Comments Off on Nando’s and M&C Saatchi Abel are on a Mission to Put Autocorrect in its Place

In their quest to highlight typically South African challenges, Nando’s, together with its advertising agency M&C Saatchi Abel, have launched #rightmyname in continued effort to contribute to the broader dialogue of South Africa. 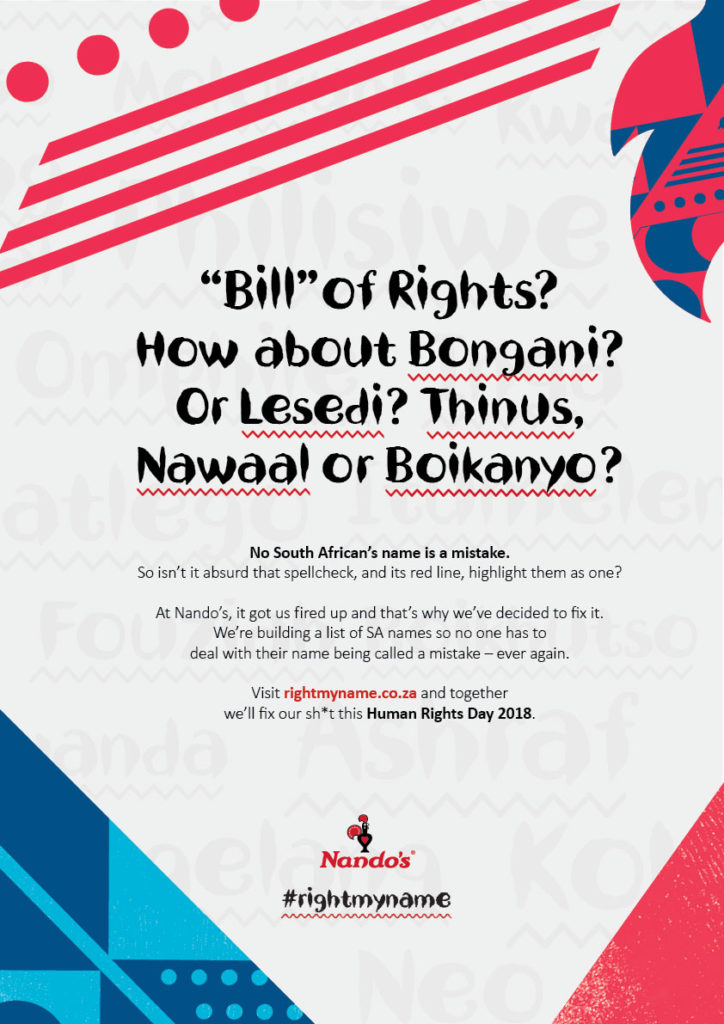 “At Nando’s, we’ve always loved celebrating South Africa’s diversity. So when we noticed that after more than 30 years, spellcheck still highlights Nando’s as a mistake, it got us thinking. What about other names in South Africa? Names like Nokuthula, Elodie, Darawees and Tebatso. Why are their names highlighted as mistakes too? Not cool,” says Doug Place, Chief Marketing Officer.

Jake Johnstone, Advertising and Media Manager at Nando’s Southern Africa, agrees. “We started the campaign to address a challenge within the organisation, where South African names – including Nando’s and PERi-PERi were highlighted as errors by spellcheck,” he explains.

He adds that the campaign has now been taken to the public by inviting all South Africans to sign onto rightmyname.co.za, a website where people can add their names to a database that will be made available for download on Human Rights Day, 21st March 2018. The list of names can then be used to update users’ computer dictionaries, so that nobody is made to feel like a mistake again.

The campaign has already attracted the nation’s attention, precisely because it touches on a highly topical issue, says M&C Saatchi Abel’s Tshegofatso Phetlhe, the Art Director whose frustration at having her name constantly underlined in red sparked the concept. 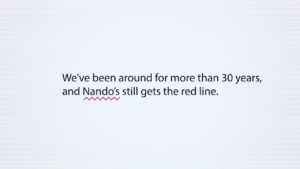 “It’s something so many people complain about and, finally, someone has taken action,” she enthuses. “This campaign is a great example of the fact that we don’t have to accept things simply because ‘it’s the way it’s always been done’. We need to realise that we have the power to create our own change. And who better to do this than Nando’s, a brand which not only brings fire to everything it does but which, incidentally, is also underlined in red.”

Phetle adds that, as our names are linked to our dignity, the red line has implications for national pride.

Gordon Ray, M&C Saatchi Abel Founding Partner and Executive Creative Director, agrees. He notes that the campaign is typical of the work M&C Saatchi Abel strives to create: “We believe in making beautifully simple solutions for an increasingly complex world. #Rightmyname is a case in point: a platform that’s easily accessible for all South Africans, with the ability to make a huge impact.”

Nando’s and M&C Saatchi Abel are on a Mission to Put Autocorrect in its Place added by Newsroom on February 13, 2018
View all posts by Newsroom →