By Newsroom on October 5, 2018Comments Off on Nord DDB’s New Billboard for McDonald’s Visualises Dyslexia to Help Raise Awareness

Dyslexia is one of the world’s most common learning disabilities, affecting an estimated 20 percent of the population globally. But those who haven’t experienced it likely don’t appreciate what a frustration it can be in daily life. 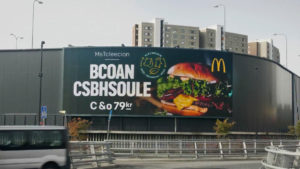 What some observers likely assumed was a glitch was in fact part of a larger awareness campaign, which includes a free book in Happy Meals about a young boy’s struggles with dyslexia.

OMD handled media on the campaign, with Prime overseeing PR.

“McDonald’s is big enough to make a difference,” said Christoffer Rönnblad, marketing director of McDonald’s Sweden. “It feels good to be able to use our scale and our voice in society to visualise an invisible problem that many suffer from.”