By Newsroom on May 18, 2016Comments Off on Orbit Ditches Old Slogan in Favour a of More Inspirational Approach

Wrigley’s Orbit gum is nixing its iconic ‘just brushed clean feeling’ slogan in favour of a more emotional approach that focuses on how having fresh breath can help people feel more confident as they prep for life’s biggest moments.

The new global effort, called ‘Time to Shine,’ takes a page out of Orbit’s sister brand Extra Gum’s playbook by showcasing how something as simple as gum can play a key role in someone’s personal life. Last year, Extra rolled out a short film called ‘The Story of Sarah & Juan’ that follows a high school couple’s relationship into adulthood.

Extra has its own subtle role throughout the video as Juan often draws memories of the two together on gum wrappers and even incorporates them into his proposal to her. To date, the film has more than 19 million views on YouTube.

While Orbit’s campaign might not be as sentimental as Extra’s, the two efforts both aim to elevate gum to something more than just a mask for coffee breath. In a one-minute ad, Orbit shows how chewing its gum can you help a person feel more confident in all kinds of situations, whether it’s meeting a cute guy on a bus, walking into a big interview, or getting ready to score a goal. 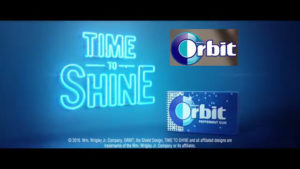 The global campaign was created by Chicago’s EnergyBBDO, Paris’s CLM BBDO and BBDO South China. It will initially roll out in the US and China followed by the UK. It may run in other markets as well down the line.

John Starkey, regional vice president of marketing at Wrigley Americas, said that the ‘Time to Shine’ campaign “marks an exciting evolution in our global creative strategy from focusing on the functional benefits of the product to connecting with consumers over the emotional outcomes of the clean feeling you get from chewing Orbit.”

“The new creative is more emotional than what you’ve seen from Orbit in the past, but it’s still rooted in the idea that when your mouth feels clean and fresh, you feel more confident and ready to make the most of your moment,” he said. “Our previous work focused on what Orbit helps you get rid of, like food and coffee, while ‘Time to Shine’ focuses on the moments that come next, and knowing that when they come, you’ll be ready.”

While the Orbit work does have some similarities to Extra’s past efforts, Starkey said that Orbit’s new ethos is “about being ready for life’s defining moments” while Extra focuses on how “gum plays a central role in shared experiences.”

“We saw with ‘The Story of Sarah & Juan’ how sharing emotional stories in a category like chewing gum can resonate in a powerful way,” he said. “Both campaigns are based on category truths.”

Orbit Ditches Old Slogan in Favour a of More Inspirational Approach added by Newsroom on May 18, 2016
View all posts by Newsroom →