By Newsroom on June 4, 2013Comments Off on PB Creative Brands Wing-Co Milk Drink With ‘Wingman’ Designs 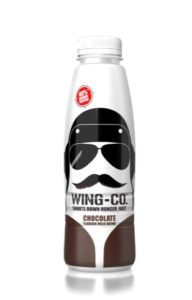 The consultancy was appointed by Wing-Co parent brand Arla at the end of last year following a recommendation from a previous client.

It developed the name, tone of voice and visual identity for Wing-Co, a high-protein drink aimed at what Arla calles ‘Balanced Blokes’ –  ‘everyday’ men in their 30s who ‘aren’t sucked in by lots of marketing rubbish’, according to PB Creative director Ben Lambert.

Lambert says, ‘We wanted to create a completely new look within the flavoured milk category, something iconic that would stand out, disrupt on shelf and ultimately make you smile!’

The consultancy created the strapline ‘shoots down hunger, fast’, and used an aviator ‘wingman’ character on packaging, aiming to reflect the idea that the drink is always on hand for ‘hunger emergencies’, according to PB Creative. 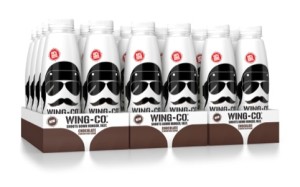 The typography was chosen for its ‘straight-talking’ look, according to PB Creative design director Sophie Escribano.

She told Design Week, ‘[Wing Co] does exactly what it says on the tin. We wanted the sense of humour but without being too patronising, so I think that’s reflected in the type and in the tone of voice on the back of pack, which is quite fun and light hearted.’