By Newsroom on October 22, 2013Comments Off on Pepsi Defeats Adele’s Boyfriend in Lifewater Trademark Dispute 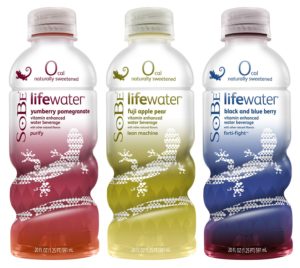 The boyfriend of singer Adele has lost a challenge against Pepsi subsidiary South Beach Beverage Company after arguing that the name of the soft drink giant’s SoBe Lifewater was too similar to his Life bottled water product.

Simon Konecki, who has a one-year-old son with Adele, had launched proceedings against South Beach, arguing that the brand should not be sold in the UK. But on 18 October, the UK Intellectual Property Office (IPO) rejected the challenge by Konecki’s Life Global Holdings.

The latter produces a drink called ‘Life water’, with profits from its sales donated to clean water projects across the world.

When Pepsi’s South Beach filed an EU Community Trade Mark (CTM) application for SoBe Lifewater in 2011, having filed a similar application in the UK, Konecki’s firm mounted a legal challenge to prevent the trademark being used.

Life Global Holdings argued that South Beach’s application breached intellectual property regulations with the use of the word “Life” in connection with the “sale of beers, mineral waters, fruit juices and syrups”, alleging that consumers would confuse the two products.

But the challenge was rejected by the CTM because the two trademarks were deemed to convey different overall impressions. The adjudicator’s verdict was that the distinctive part of the SoBe Lifewater name was the word ‘SoBe’, which meant it was unlikely to be confused with Life Global Holdings’ Life.

Fiona McBride, partner and trademark attorney at law firm Withers & Rogers, commented:  “The UKIPO decision was predictable in light of the earlier CTM decision. The view taken was clear that whilst both marks would be operating in identical markets, they would be able to do so without causing consumer confusion.

“The decision rested on the hearing officer’s view that South Beach’s mark started with the made-up word ‘SoBe’ which was very different to Life’s earlier trademark registration for the word ‘Life’. Although Life’s trademark had been used in the form Lifewater, the comparison had to be between Life’s registered trade marks for Life and SoBe Lifewater.

“Trademark owners are right to protect their marks and need to be vigilant when it comes to checking the trade mark applications of new market entrants.”