By Newsroom on February 12, 2016Comments Off on Pepsi Max Embrace Snapchat Sponsored Lenses with Valentine’s Push 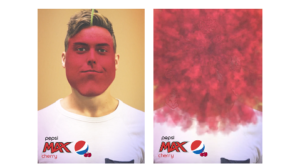 Pepsi Max is of the first UK brands to partner with Snapchat to bring Sponsored Lenses to users. The drinks giant is turning selfies into ads for its ‘Chelfie’ Valentine’s Day push.

Available for 24 hours on 14 February, the drive will see users give their pictures “a cherry-flavoured” makeover.

A special effect filter will superimpose a fizzing can of Pepsi Max Cherry on to users’ images and the interactive decal will then see the drink poured into the Snapchatter’s mouth upon movement. The animation will end with selfies being disrupted by a “surprising and unexpected” explosion of the fruit flavoured drink.

Pepsi’s senior brand manager, Alex Nicholas said: “Pepsi Max is a digital-first and socially-led brand, continually looking for innovative ways to engage with our millennial audience where they are and create dynamic, sharable content. We’re excited to be one of the first brands to authentically engage with our fans on the Snapchat platform.”

Snapchat shuttered its Lens store at the start of 2016 to focus on its sponsored filters ad format. The first US brand to make use of the offering was 20th Century Fox which ran a push for The Peanuts Movie on the platform, allowing users to overlay images of Snoopy and Woodstock around their selfies while the show’s theme song played in the background.

The UK is the messaging app’s second largest market and with 10m snaps reportedly decorated with lenses each day worldwide, it isn’t hard to see why marketers want to jump on the Snapchat bandwagon.

KFC was the first company to use the platform’s Sponsored Geofilters in UK stores back in December, and recently Viacom announced a multi-year deal with the startup.