By Newsroom on February 17, 2017Comments Off on Pepsi Release New Uncle Drew Content in time for NBA All-Star Weekend

The content is available on the all-new UncleDrew.com which is fully available tomorrow at the start of NBA All-Star Weekend. Fans were able to preview the site at the beginning of February for a glimpse of the digital one-stop-shop for all things Uncle Drew. Fans will now have full access to exclusive Uncle Drew merchandise, behind-the-scenes footage of the cast’s character transformations and the catalogue of Uncle Drew episodes to date.

The vignette features Irving and returning co-stars including former two-time NBA All-Star Baron Davis as “Louis,” and actor JB Smoove as “Angelo.” The storyline picks up from the chapter four prequel with all three characters hanging out in their neighbourhood pizza parlour engaging in their signature back and forth banter about basketball. New Uncle Drew shorts will be released throughout the rest of this year’s NBA season. 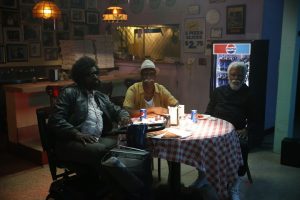 “With fresh and exciting content, Pepsi will look to reignite the courtside excitement around Uncle Drew and continue its legacy of rewarding fans with fun, exciting and authentic moments in pop culture and sports,” states Aziel Rivers, Director, Pepsi Marketing. “With the availability of brand new Uncle Drew merchandise on UncleDrew.com, we are really able to show the evolution of the Uncle Drew brand which keeps fans connected at multiple touch points both on and off the screen.”

Next in line for the Uncle Drew franchise are plans to feature Uncle Drew in a feature length film conceived, developed and produced by PepsiCo’s in-house content creation arm, Creators League Studio.

“Every day, we continue to extend the equity of our iconic Pepsi brand beyond the bottle,” says Lou Arbetter, General Manager, Creators League Studio. “Today’s consumers want to live the brand as much as consume it, and the tremendous success we’ve had with the Uncle Drew franchise is a perfect example of how we’re building ecosystems around our flagship brands. Pepsi and Kyrie Irving are looking forward to expanding the Uncle Drew universe. We are excited for the recent launches of both UncleDrew.com and a corresponding merchandise line, and can confirm there are plans to feature Uncle Drew in a feature length film.”