By Newsroom on January 15, 2016Comments Off on Pepsi Rings in the Chinese New Year with the Monkey King Family

Created by Civilization Shanghai, the ad tells the story of a young boy following in his family’s footsteps. Following four generations of ‘The Zhangs’, who have each played the role of the legendary ‘Monkey King’ on stage, he is next to step up to the challenge. 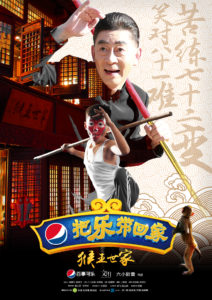 Back in 2015, Civilization Shanghai worked with PepsiCo to ‘Bring Happiness Home For The People’ alongside award-winning director Wei-Ran Li and China’s top celebrities.

However, with 2016 comes the Year of the Monkey, drawing PepsiCo’s attention to this playful creature. The brand demonstrates once again just how global it is in nature, paying homage to international traditions and aligning itself with youthfulness through an animal that embodies fun. The ad has proven a big success in China, clocking up millions of views across multiple accounts online.

Through authentic storytelling and high production value, the spot runs just over six minutes and is cinematic in style. The viewer might think they’re watching a scene from The Karate Kid, as the director fuses colourful imagery with beautifully orchestrated scenes of falling rain as the young boy practices martial arts for his role. PepsiCo know how to leverage great talent to create global appeal.

Pepsi Rings in the Chinese New Year with the Monkey King Family added by Newsroom on January 15, 2016
View all posts by Newsroom →