By Newsroom on May 15, 2015Comments Off on Pepsi, Usher & UrtheCast Partner To Create An Epic Film Adventure

In a first-of-its-kind, Pepsi is creating and producing a short film that will include footage from UrtheCast – the world’s first full-color Ultra High-Definition video system located aboard the International Space Station (ISS), feature Pepsi consumers from around the world and leverage the creative and artistic direction of eight-time Grammy award winning entertainer Usher. As part of this year’s Pepsi Challenge campaign, the interstellar short film combines video, music, technology and storytelling, with Pepsi consumers across the globe playing a role in the experience.

“On one level, the ambition of this short film is mind-boggling because it’s an original screenplay that features real-life footage shot from outer-space,” said Frank Cooper III, Chief Marketing Officer, Global Consumer Engagement, PepsiCo Global Beverages Group. “But, having visionary creators, cutting-edge technologists like UrtheCast and an iconic artist like Usher make it a realistic, exciting collaboration across tech, film, music and pop culture.” 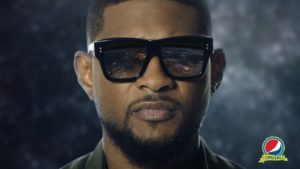 To be released this fall, the short film will be shot from multiple locations and perspectives – both on Earth and in space. Designed to unite and inspire generations around the world as part of the #PepsiChallenge, Pepsi will invite consumers to participate in this unique film phenomenon. Filming will take place in more than 10 countries across four continents where thousands of consumers will join together to be filmed by UrtheCast’s proprietary HD video camera – permanently and impressively leaving their mark on history as part of this once-in-a-lifetime experience.

While UrtheCast captures a powerful perspective from space that few have ever experienced, Usher will invite fans to capture through a single photo an image that they feel inspires and amazes others to look at the world in a new way. Beginning today through June 2nd, fans around the world can submit one photo each day to PepsiChallenge.com. Usher will select the most powerful image and invite the talent behind the lens to meet him on set at the upcoming film shoot, with the winning image also featured in the short film.

“Throughout my career, I’ve had the opportunity to be a part of some truly amazing experiences,” said Usher. “I’ve always tried to push boundaries and to inspire others to go beyond what they perceive as their limits. I feel fortunate to have the opportunity to partner with Pepsi and UrtheCast to be a part of creating this intergalactic short film shot from space and am excited to jump in and take on this once-in-a-lifetime challenge and experience.”

With a launch that marked #PepsiChallenge as the #1 Twitter trending topic worldwide, and engagements by and with Pepsi global brand ambassadors and international luminaries, fashion houses and sports celebrities alike, the Pepsi Challenge continues throughout 2015 with additional global and local challenges designed to galvanize consumers around the world to live life to the fullest and make every moment – big or small – epic.

Challenges are issued on Pepsi social channels, PepsiChallenge.com and via global and local ambassadors.

Pepsi, Usher & UrtheCast Partner To Create An Epic Film Adventure added by Newsroom on May 15, 2015
View all posts by Newsroom →