On January 29, 2015, PepsiCo launched the 2015 version of the Bring Happiness Home (BHH) program in Beijing, China. In collaboration with China Women’s Development Foundation (CWDF), the popular video-making and sharing app Meipai and many celebrities, PepsiCo is looking to mobilize the society into sharing their stories of family reunion during the Spring Festival through self-made mini movies. Meanwhile, as part of the Happy Spring Festival (HSF) activities organized by the Chinese Ministry of Culture (MOC), this year’s BHH will be broadcast overseas for the first time.

According to a recent survey, there is a growing addiction to mobile phones among the younger generation. About 51% of the respondents say they will use their mobile phones even with their families in the company, and over 45% of the young people spend more time on “mobile phones and computers,” than with their parents during the Spring Festival vacation.

To encourage the young people to move their eyes away from the mobile phone screens, and spend some valuable time with their parents and friends, PepsiCo will partner with Meipai in this year’s BHH. The participants of the program are invited to record and share their moments of happiness during the Spring Festival reunion with their parents and families, so that they will bring back home not only happiness, but also their love and heart.

The best BHH mini movies will be made into a micro film, and broadcast simultaneously in China and Times Square in New York as part of the HSF celebrations in the city. As the first BHH campaign outside China, it will provide an opportunity for the overseas Chinese communities to share the same festive joy and happiness of their compatriots.

The MOC representative for the HSF program expressed that these authentic and happy stories filmed by many ordinary Chinese themselves will send out warmth and happiness of the Chinese New Year to the whole world. Launched in 2010, HSF of MOC is currently China’s largest cultural exchange program overseas.

PepsiCo’s pop stars, including Huang Xiaoming, Jolin Tsai, Show Lo, Amber Kuo and Li Yifeng, also experimented with the role of film director and made their own New Year’s mini movies with their families and best friends, which have greatly amplified the message of Bring Happiness Home in the society.

Richard Lee, Chief Marketing Officer of PepsiCo Greater China Region (GCR), said, “Unlike the previous BHH campaigns, this year, the consumers are given the opportunities to direct and make their own mini movies, and thus better associate themselves with the program. The partnership with Meipai has also made film-making an easy thing for these “amateur directors”. 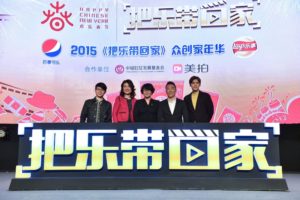 Meanwhile, as part of the 2015 BHH campaign, PepsiCo is also introducing crowd-funding into the charity cause in collaboration with the CWDF. The participants of the BHH program can make donations to the Postal Parcel for Mothers (PPM) program of the CWDF by scanning the QR code with their mobile phones. Every 200 RMB yuan of donation can buy one postal parcel for the mothers living in poverty-stricken areas. PepsiCo GCR has been sponsoring the PPM program for three consecutive years. This year, PepsiCo GCR will deliver 2,015 postal parcels to help the mothers in the remote mountainous regions get through the cold winter days and enjoy a happy Chinese New Year.

Yu Hongqiu, Vice Chairwoman and Secretary of the ACWF and Vice Chairwoman of the CWDF, said, “PepsiCo has been providing support for the Mother Water Cellar (MWC) program over the past 14 years, and remains an important contributor to the development of CWDF. The BHH campaign, which again brings together the strengths of public welfare organizations and the business sector, builds a platform for the public to contribute their share to the charity cause.”

BHH, which has been running for four consecutive years, is PepsiCo’s brand program for the Chinese Spring Festival and one of the most successful marketing campaigns in China’s food and beverage industry. From the 2012 slogan of “coming back home is the happiest moment for your parents,” to the 2013 slogan of “where there is love, there is home; where there is home, there is happiness,” the theme of “love,” and “home,” has been running through the BHH program. Under the 2014 campaign, PepsiCo called on everyone in the society to share their happiness and contribute to the realization of the “Chinese dream.” This year, by giving consumers the chance to make their own mini movies, the BHH program has taken a step forward and reached a whole new level.