By Newsroom on October 2, 2013Comments Off on Pot Noodle ‘Transexual’ Ad Escapes Ban

Unilever snack brand Pot Noodle has escaped censure from the ad watchdog, despite two complaints from members of the public that it was “offensive” and “encouraged harmful discriminatory behaviour and treatment towards transsexual people”.

The character then said: “Ever since I was little I’ve always dreamed of living an easy life. So, I married a footballer. I’ve been a Wag for two years now. I’m a real lady of leisure. I’ve even got my own fragrance. The scent’s inspired by my greatest love, it’s hot like a fever, spicy like chilli, divine like chicken. Piri Piri by Brian.”

The complaints to the Advertising Standards Authority challenged whether the ad was offensive and breached the Broadcasting Code, because it condoned and encouraged harmful discriminatory behaviour and treatment towards transsexual people.

In response to the complaints Unilever said it believed the ad used “a cheeky and humorous tone” that was commonly used in Pot Noodle advertising.

The FMCG company said the ad depicted a man dressed up as a woman to add a humorous twist to the narrative and to caricature the Wag lifestyle and that the ad was not intended to reference real life or transsexual people.

They said the video and photo shoot for the Piri Piri by Brian perfume replicated the “highly stylised nature of perfume ads”.

In its response, Unilever said it believed the presentation of Brian in the costume of an angel, which was often associated with women’s perfume, was a humorous twist.

It said the character, Brian, was shown with his legs wider apart in some scenes as a reference to fashion shots and music videos and replicated poses of well-known female artists.

The broadcast clearance body Clearcast said it believed the character Brian, “did not reflect or portray a trans individual, rather they believed the ad made clear that Brian was a self-identifying man”. 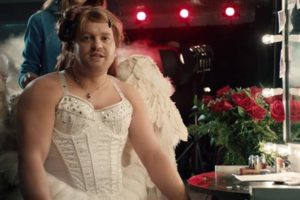 It said the ad intended to use the juxtaposition of the comedic pantomime dame to caricature and parody the absurd and lavish lifestyles of a Wag.

Unilever added that the character, Brian, was shown in situations that were generally regarded as enjoyable. They also said the character was not in a situation where he was the victim of discriminatory behaviour or treatment.

It therefore believed the ad did not condone or encourage harmful or discriminatory behaviour towards transsexual people.

Clearcast believed the ad did not condone or encourage “harmful or discriminatory” behaviour towards transsexual people because the character Brian was not a transsexual individual.

It also said the voice-over did not contain content that incited negative behaviour, nor did the ad invite the audience to speculate as to the character’s gender identity.

The ASA considered the ad made clear that Brian was a self-identifying man who sought an easy life that could be achieved through the lifestyle of a Wag.

As such, it considered viewers were likely to interpret the portrayal as a light-hearted mockery of Wag culture rather than transsexual people.

Although the ASA acknowledged that some people might find the ad distasteful, it considered it was not likely to cause serious or widespread offence, or condone and encourage harmful and discriminatory behaviour and treatment towards transsexual people and so did not uphold either complaint.