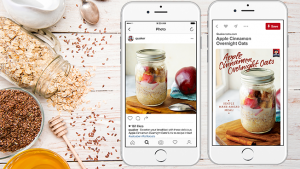 Even oatmeal is going digital. To show that Quaker’s oats are used to make more than just oatmeal, the PepsiCo-owned brand is launching a campaign as part of a month-long effort the brand is dubbing ‘Oatober.’

There is also a Tumblr and webpage and a series of sponsored videos with food publisher Tastemade that will roll out on Snapchat, Facebook and Pinterest later in October. All told, Quaker’s campaign will include 31 different recipes for the month of October.

“Oatober is a digitally-focused campaign because the digital and social space is where people connect with food and share their experiences,” said Becky Frankiewicz, SVP and GM of Quaker Foods North America. “Food trends online have inspired some of our marketing campaigns, such as overnight oats. You can also find many oat-based recipes on Quakeroats.com.”

The campaign also includes a big media buy with The New York Times. The brand will run a full-page ad in the newspaper and start an online campaign within the cooking section of the site.