By Newsroom on April 4, 2016Comments Off on Real Iced Tea Co ‘Hits the Spot’ in Refreshing New Push by BWM Dentsu

Schweppes is encouraging people to take a moment to unwind – no matter where they are – with its Real Iced Tea range in an integrated campaign by BWM Dentsu.

The agency won the project after a competitive three-way pitch. It is BWM Dentsu’s first work for Schweppes since being appointed to the company’s creative roster in January 2016.

The ‘Brewed to hit the spot’ integrated campaign is the first major above the line campaign for Real Iced Tea, since launching in September 2013.

McKinna said: “We wanted to convey the idea that a Real Iced Tea is brewed from natural tea leaves, delivering moments of refreshment and respite from people’s busy lives. ‘Brewed to hit the spot’ best expressed this message. We were excited to see BWM Dentsu bring this idea to life and have been very impressed by the high quality of work the team has delivered.” 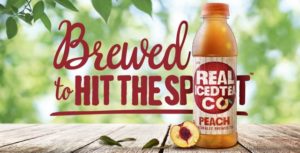 The film was shot in a lush, hand-built oasis on Collins Street in the centre of Melbourne’s CBD, created using real ferns and foliage.

BWM Dentsu wanted to highlight the natural, real flavours of the product, so worked hard to use minimal special effects when creating the spot. The one-shot camera work added to the laid-back feeling and will help the spot stand out amongst the noise of other ads.

Mark Watkin, managing director, BWM Dentsu Melbourne, said the agency was proud to work with such an exciting emerging brand.

Watkin said: “Schweppes has a long history of offering Australians high-quality products, and the Real Iced Tea range is no exception. We wanted to give people a taste for how refreshing the range is and we think the campaign delivers exactly this.”

The campaign launched on Sunday, 3 April, and will run across TVC, outdoor and digital.