Ribena partners with JWT London, Brass and Diverse to unlock a Ribenary world with interactive app

By Newsroom on April 27, 2017Comments Off on Ribena partners with JWT London, Brass and Diverse to unlock a Ribenary world with interactive app 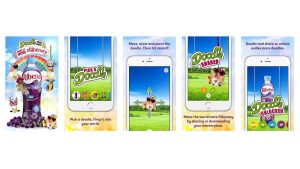 Ribena has partnered with J. Walter Thompson London, Brass and Diverse to create an interactive app called ‘Doodle Your World’, allowing users to ‘doodle’ on their surroundings, by using Ribenary characters that come to life on their screens.

The concept behind the new Ribena ‘Doodle Your World’ app has been developed from the overarching brand campaign ‘You Can’t Get Any More Ribenary’, and follows on from Ribena’s ‘Colouring Café’ activation last year. The app draws inspiration from the popular art of ‘Doodle bombing’ and encourages Ribena fans to play with their world and ‘Make It More Ribenary’. 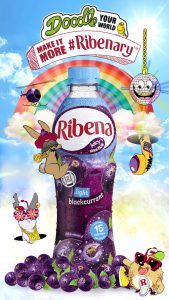 A user can ‘level-up’ their “Doodley skillz” by unlocking different animations at different play points throughout the app. The app launch also aligns with the launch of the new interactive Ribena product packaging whereby a user can unlock more content if they scan one of the new-look Ribena bottles.

There are 15 animations available in the app; the first 5 animated doodles, already unlocked for users, are Rabbi-G, Scaredy Pipe, Huckleberry Funk, Barney Trouble and Disco Derrick, illustrations by the popular Bristolian street artist, Cheograff, who is known for his quirky cartoon creations. Users can unlock more doodles by scanning Ribena bottles featuring the interactive pack icon OR by sharing across social platforms. Fans will have to look out for a few more surprise Ribenary character releases throughout the campaign. Please see top 5 doodle descriptions below.

The full campaign is expected to break on the 29th of May, to support the launch of the ‘Doodle Your World’ app. The campaign will run across TV, outdoor, and social media and includes Ribena’s biggest ever sampling campaign. 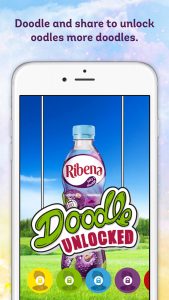 Emmeline Purcell, Senior Brand Manager at Ribena, said: “We wanted to create a playful experience with our target audience that brought the ‘Ribenary’ campaign to life in a way that is surprising and engaging. We’re allowing consumers to make their world more Ribenary in an inherently interactive and social way.”

John Cherry, Creative Director at J. Walter Thompson London, said: “This is just the start of our new Ribena Doodle Your World platform that will transform how people can engage with Ribena.  We’ve created a set of fun and playful Ribenary doodle content that people can bring to life using the app’s 3D tracking and then share with their mates across social.”

Andrew Brown, Creative Director at Brass, said: “It’s been exciting designing Ribena’s first branded mobile app. We wanted to create a very personal Ribena brand experience that linked the bottle in your hand to the mobile in your pocket. By bringing together great content with cutting edge SLAM based 3D tracking technology, we’ve designed a unique augmented reality app that will excite and delight consumers in an unmistakeably Ribenary way.” 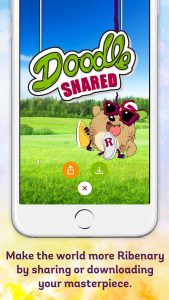 You can download the app on Google play here, and from the Apple store here.

Do we know where he’s climbing to? No, we don’t think anyone does. Scholars maintain he’s been trying to reach gangster paradise for centuries. What we do know is that his poor little paws don’t have the dexterity to summit.

Still timid after the kids from the block tagged his pipe up, scaredy is always on the lookout for the notorious ‘Bena. What he lacks in courage he makes up for with vision. Sshh, shhh, shhh… Be careful or you’ll scare him.

The big rabbit, the funk daddy, Funk Master General. He’s a head nodding flower spinning son of a doe. So put on your tunes and let him groove. 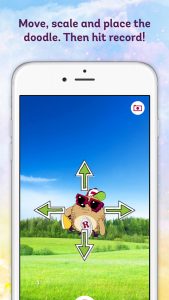 Like a Roman emperor, this reclining hedgehog takes in the world from a laid back point of view while Ribena is poured into his mouth from above. Excuse the burp, he’s still a wild animal after all.

Aah, the old ball and chain. But no seriously Derrick is too old to be wearing a grill. Certainly one with a pun on it. He slowly rotates and awkwardly stares at someone in the room until they acknowledge he’s cool.

The 3D tracking technology that makes this app possible is the same that is used in self-driving cars. Simultaneous Localization and Mapping, or SLAM, is a system whereby the phone’s camera maps the environment, which allows the Doodles to be fixed in place within a scene.

The app was developed using 3D games creation software Unity and incorporates the Wikitude Augmented Reality SDK to provide the special mapping and the Vuforia SDK for object recognition. 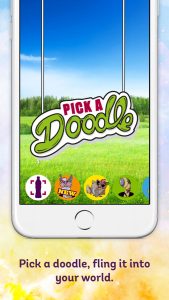 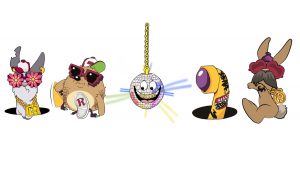 Ribena partners with JWT London, Brass and Diverse to unlock a Ribenary world with interactive app added by Newsroom on April 27, 2017
View all posts by Newsroom →