By Newsroom on May 7, 2013Comments Off on Ruffles Brand Introduces Ruff McThickridge, Ultimate Action Hero

Ruffles potato chips, one of the flagship brands from PepsiCo’s Frito-Lay division, is about to unveil a new cast of characters. Enter Ruff McThickridge and his closest buds, Bo Dato, Mora Crunchy and the Bomb-Defusing Sloth, a group of self-described hotshots sure to make any 1970s action movie hero proud.

The core of the new marketing campaign includes a series of humorous movie-trailer-style ads that parody 1970s grindhouse-style action movies. Premiering with “Honey Mustard,” each “film” is teased with these ads that star the brand’s newest cast of characters — whose thick mustaches and questionable acting would give any grindhouse flick a run for its money. 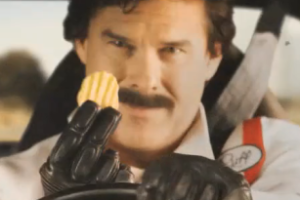 Unfortunately for the villains, Ruff and Co. are inspired by one purpose and will succeed no matter the cost: fighting for their prized possession, Ruffles potato chips. In recent years, Ruffles has honed in on Millennial-age men as its core target, starting with the development of flavors that were inspired by the real foods guys love — and this new campaign builds on that momentum.

“Ruff McThickridge and his posse bring some really hilarious personalities to the Ruffles brand. Admittedly, I would hang out with this crew,” said Tony Matta, vice president of marketing, Frito-Lay North America.

“Our fans are looking to engage in an environment like the one we’re creating in Ruff’s world  – with awesome, comedic content that allows consumers to help define what Ruff and the gang become as a creative vehicle long term.”

At the heart of the narrative is hero Ruff McThickridge, a guys’ guy who’s about as loyal as they come — and the brand’s most fanatic fan. Ruff might not be the sharpest chip in the bag, but he’s a born leader — and loves Ruffles chips more than even ladies and rock n’ roll.

Ruff’s personality was mirrored after television and movie characters from the ’70s, ’80s, ’90s and even 2000s. Bo Dato, Ruff’s closest friend and sidekick, is an enthusiastic wingman with a million-dollar smile and a $4 wardrobe.  The first spot, “Honey Mustard,” stars the duo racing cars in the “Ruffles Cup” and outrunning evil forces who want to destroy their beloved Ruffles chips. 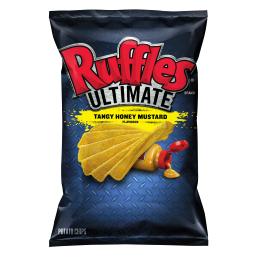 The television, cinema and digital ad campaign for 2013 will feature 15-, 30- and 60- second spots. They will be supported by a robust digital component featuring more online content and behind-the-scenes “chip clips,” a Tumblr page full of GIFs, and Twitter, Instagram and Facebook accounts starring Ruff McThickridge as himself.

Ruff will even make appearances in the real world at various events. More TV ads and content will debut in 2014 as Ruff and company continue to take center stage.

Ruffles Ultimate potato chips are available in a variety of flavors and have ridges twice as deep as the ridges in Ruffles Original potato chips.