Robinsons, owned by Britvic, and Saatchi & Saatchi London release ‘Listen Up’, a multi-million-pound, multi-channel brand campaign to launch Fruit Creations, the first in a new range of Robinsons products designed especially for grown-ups. 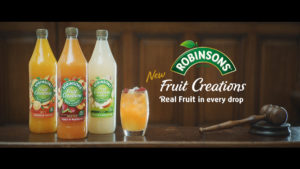 The protagonist of the fast-paced 40” hero TVC is a young girl who charmingly introduces the benefits of the new range to surprised grown-ups in a series of adult scenarios: a boardroom, swimming pool and courtroom all feature.

Fruit Creations has twice the fruit content of core Robinsons and exciting new flavour combinations including Peach and Raspberry and Pear and Blueberry.

The “40 advert and “20 cut down will run throughout the year on TV and VOD in the UK and Ireland. The campaign will also be supported by Facebook and social activations alongside PR and experiential support. 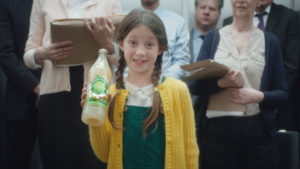 “Listen up” is the first work created by Saatchi & Saatchi London since winning the Britvic kids and family portfolio account in August 2017, and marks a new direction for the brand. The next stage of the campaign starts in March with the launch of Robinsons Fruit Cordial.

Matt Barwell, chief marketing officer at Britvic said, “With a rich heritage dating back to 1823, Robinsons squash remains a firm favourite for families, bought by four in 10 households across the nation. Kids are currently seen as the main consumers of squash, so the creative is designed to help land the new adult proposition in a way that’s new for Robinsons and entertaining for adults, using the disarming wisdom of children. With a staggering three million glasses of Robinsons squash being drunk every day in Britain, who better than our child squash experts to educate adults about the great taste of new Robinsons Fruit Creations?” 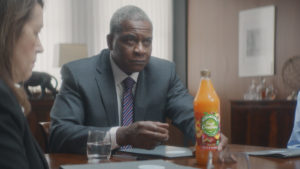 With a heritage dating back to the 19th century, and famed for its links with Wimbledon championships where Robinsons Barley Water was first invented in 1935, today Robinsons is a much-loved household name and maintains its position as the no.1 squash brand in Great Britain.

Kate Stanners, global chief creative officer at Saatchi & Saatchi added, “As such an iconic, well-loved staple in British households it’s been fun turning the category on its head by using the real experts in squash to sell Robinson’s new adult portfolio. It’s about time we listen to our real bosses – kids!”