By Newsroom on September 19, 2017Comments Off on Sainsbury’s Reveals Snapchat Spectacles Ad as it Looks to Appeal to Fresh Generation of Shoppers

Sainsbury’s has ad shot its latest ad through the lens of Snapchat Spectacles as it looks to “lead the charge” in experimenting with new and creative ways of filming.

The grocer is the first UK brand to use the glasses to film an ad which will appear in Snapchat’s walls.

The spot was shot in a 115-degree circular format to give a first person viewpoint, and was designed to capture the comforting feeling of huddling road a hot pot of food and diving straight into the saucepan for a taste.

The push is part of the brand’s wider ‘Live Well’ strategy, which was devised by its incumbent creative agency Weiden + Kennedy after it nabbed the account from AMV BBDO in 2016. 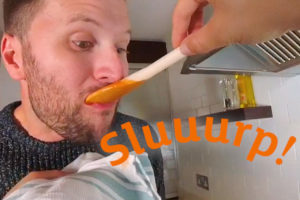 Gravity Road has been working closely with W+K on the Spectacles iteration, and the former’s founding partner, Mark Eaves, sees the ad as an opportunity to tap into a new generation of shoppers and challenge narrow perceptions of who a Sainsbury’s shopper might be.

The agency is hoping that Snapchat’s 10 million-strong, primarily young, audience will help move supermarket marketing move beyond the cliché that its only women with families who shop.

“There’s a whole new generation of people who are walking through the doors of Sainsbury’s every day and we feel like it’s our duty to not only represent them in advertising, but also to do it in ways that they recognise for themselves, with new creative means and the new languages of mobile,” revealed Eaves.

Since rolling out the new positioning, W+K has focused heavily on fast-paced colourful ads which usually show fresh Sainsbury’s food backed up with high-impact sounds or interlaced with real-life scenarios like dancing while cooking or ‘the anticipation people feel when they hear the phrase ‘dinner’s ready’.

The first-of-its-kind UK Snapchat ad allows viewers to rotate the phone and see more action from different perspectives, then if they swipe up then they are presented with a host of autumnal recipes from Sainsbury’s. 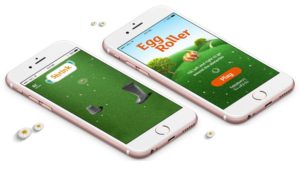 For Gravity Road, it was important to approach Snapchat with creative tailored to the app, something Eaves believes not enough brands are doing.

“It’s one thing to use those platforms, but there are still too many brands putting TV ads on Snapchat, it’s sad to say,” he noted.

Sainsbury’s is no stranger to Snapchat, having used the platform to extend its festive campaign last December with an interactive karaoke Lens. During Easter, it marked the occasion with a retro-style Snapchat game.

Sainsbury’s Reveals Snapchat Spectacles Ad as it Looks to Appeal to Fresh Generation of Shoppers added by Newsroom on September 19, 2017
View all posts by Newsroom →