By Newsroom on April 16, 2018Comments Off on Schweppes Releases New Brand Film “What Do You Expect?” by BETC Paris

“What Did You Expect?” becomes “What Do You Expect?” Changing just two letters creates a whole new meaning: from a closing conclusion to an opening cliff-hanger; from a now-expected wink to an invitation to explore the unexpected. 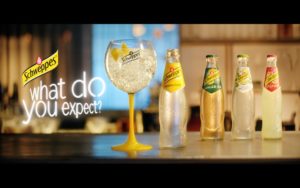 this new editorial line, the Schweppes brand is reasserting its uniqueness, style and position as one the greatest premium brands.

There’s something unclassifiable about Schweppes, and the success of the brand is based on a fundamental ambiguity: selling soda without ever becoming “just” soda.

The film starts with a bartender who slides a bottle of Schweppes across the bar to invite a young lady, as an invitation to escape the party she’s at, jump down the rabbit hole and go for an unexpected and crazy night out.

The Schweppes keeps on sliding across the endless bar, passing through places that are each as amazing as the next and symbolising the timeline of this unexpected night-time jaunt. At the end of the film, the young lady drinks what’s left of the Schweppes. The bartender sends a new bottle sliding, with what seems like a dare: and you, “What do you expect?”

winding bar that runs through the spot represents how Schweppes can be your trusted companion throughout the night. Not only does it take you places you’ve never been but twists and turns to keep up with you wherever you go!

The film was directed by Michael Gracey, who has just made the feature-length The Greatest Showman with Hugh Jackman and is also well known for Evian’s famous “RollerBabies” (the world record for the most-watched advertisement on YouTube).

About making the film he says, “We wanted to push the boundaries of any regular night out by playing with how both the girl and the bottle lead each other into unexpected situations and how we could flip those scenarios on their head. For example, the laundromat bar could’ve just been a square space you crawl into through the washing machine, but instead we wanted to defy your expectations — so the entire bar spins like a washing machine. 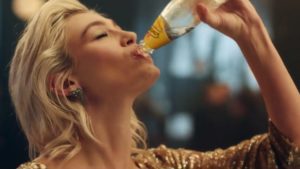 was really cool was that basically with Schweppes, nothing was off limits! The creative freedom granted to BETC and the filmmaker is what gives the spot its distinctive energy.”

Stéphane Xiberras, President and Creative Director of BETC Paris says, “A couple of years ago we had a great time with Michael putting our twist on the classic story of Cinderella with our film ‘The Mechanic’ for Cillit Bang and we thought it would be fun to another tale. Because, if you watch the film closely, you’ll see that even if the girl is wearing 12 inch heels and a sparkly dress – it’s a little Alice in Schweppes Wonderland!”

Schweppes Releases New Brand Film “What Do You Expect?” by BETC Paris added by Newsroom on April 16, 2018
View all posts by Newsroom →