By Newsroom on September 22, 2016Comments Off on Shredded Wheat Give Consumers Chance to ‘Shred Life’ & Win £150 in Diving Competition

McCann London and Shredded Wheat have given consumers the chance to ‘Shred Life’ in a new diving competition with a £150 cash prize. 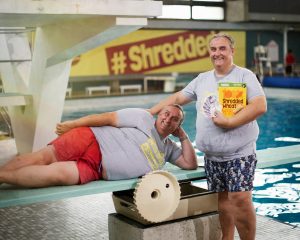 Following on from the Shredded Wheat campaign in which a diver was seen jumping into the chlorinate unknown to ‘Shred Life’ himself, the brand has expanded the creative further by allowing consumers to have their turn.

Partnering with Flux Broadcast, responsible for capturing and live-streaming the event, Shredded Wheat and McCann London opened up Crystal Palace swimming pool to the public and challenged them to jump off a diving board and into the water while grabbing the Shredded What box containing £150 and a year’s supply of the cereal.

Streamed using Facebook Live from the Shredded Wheat Facebook page, ex-Olympic diver Chris Snode and sports commentator Carlton Kirby gave poolside commentary at the event, while diving coaches were on hand to guide people on the best and safest way to dive.

The event took place from 11am – 2pm on Thursday 15th September.

Shredded Wheat Give Consumers Chance to ‘Shred Life’ & Win £150 in Diving Competition added by Newsroom on September 22, 2016
View all posts by Newsroom →