By Newsroom on August 5, 2016Comments Off on Skol Launched Limited Edition Cans For The Olympics 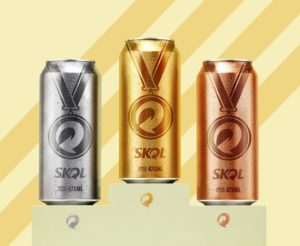 Official Olympic sponsor, Skol has launched a limited edition of three cans inspired by the original metals of the Olympic award medals – Gold, Silver, and Bronze – to celebrate the event and toast with all those participating in this party.

Over 1 million medal cans were produced and they can be found in areas sponsored by Skol during the Rio 2016 Olympic Games. A special pack, with a podium stand and branded case, will be available for purchase online. The cans were developed by F/Nazca Saatchi & Saatchi.

With four premium locations, Skol promises to make every 10th of a second even more fun than the previous one, and less than the next. Vila Skol, at the Museum of Modern Art (MAM), will be the stage for iconic parties. Skol Arena will be the place to party on game days at the Maracanã Stadium. Skol Live House, at the Olympic Park, will make people experience the thrill of the Olympic Games. 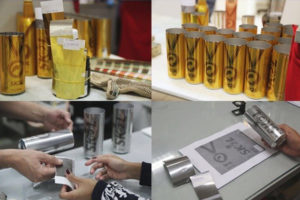 Skol FanZone, the largest venue on Olympic Boulevard (1,000 sqm) and located next to the Olympic Cauldron, will have the Skol Panoramic Balloon that will offer the most beautiful view of the city by rising 150 m.

The Beer Garden will also be located there for the transmission of the games and plenty of music. In addition to these locations, the brand will be present in the various Olympic houses and parties scattered throughout Rio de Janeiro, as well as in 280 kiosks on the oceanfront.

Skol Launched Limited Edition Cans For The Olympics added by Newsroom on August 5, 2016
View all posts by Newsroom →