By Newsroom on June 2, 2017Comments Off on Smirnoff Marks Pride Month with Anti-Trolling #ChooseLove Initiative 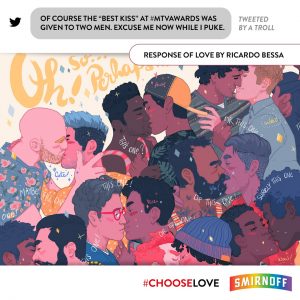 Smirnoff has come up with a creative way to combat abuse against members of the LGBT+ community online by responding to trolls with personalised illustrations.

To mark Pride Month, which takes place each year in June, the brand has teamed up with a collective of socially engaged artists and illustrators for its #ChooseLove campaign.

As part of the UK initiative the brand will use social monitoring tools to identify LGBT+ Twitter users who have received abuse based on their sexual orientation or gender identity. Offensive tweets will be highlighted by a taskforce of artists who will respond to hateful messages with illustrations themed around love.

A selection of the artwork created as part of Smirnoff’s campaign will be shown at an exhibition on 6 and 7 July ahead of the Pride in London Parade. 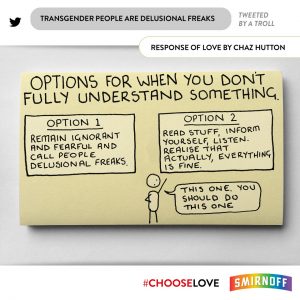 The campaign follows on from a report from Galop, an LGBT+ anti-violence charity, which found that one in three members of the LGBT+ community (31%) have experienced online abuse targeting their sexual orientation or gender identity.

“We are proud to have stood shoulder to shoulder with the LGBT+ community for over 20 years,” said Chris Laidlaw, head of Smirnoff Europe. “We feel that it is our responsibility to help encourage diversity, equality and inclusivity in society.”

He added: “Smirnoff wants to put a spotlight upon the worrying trend that Galop has identified, and through our campaign we hope to have a positive impact that encourages a dialogue of understanding, respect and compassion in both social media and wider society. By collectively taking action we can all spread a message of inclusivity, diversity and love.”