By Newsroom on April 27, 2018Comments Off on SNAP LDN Launches New Campaign for Carabao Energy Drink, “The Bonkers Drink for Bonkers Lives” 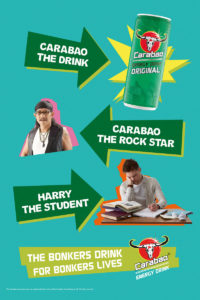 It was invented in Thailand. By a rock star. Called Aed Carabao. Aed then named both his band and his new energy drink after a SE Asian water buffalo, called a carabao. Carabao (the fizzy energy drink one) comes in a range of brightly coloured cans and has a cow skull for a logo.

Wanting to make a name for itself here, the drink started with an unconventional approach to football sponsorship. It gave its name to the League Cup, now the Carabao Cup, and three different English football teams – Chelsea FC, Reading FC and the slightly less well-known Abingdon United Ladies FC. 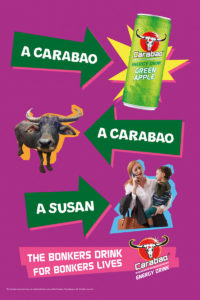 So they created a new campaign to help launch the drink properly in the UK, with the tagline, ‘Carabao. The bonkers drink for bonkers lives’. The campaign brings to life this incredible backstory and draws parallels between it and our own, at times, ridiculously busy lives. 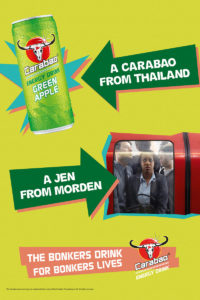 John Luck, Carabao CMO said: “In 18 months we have become a major football sponsor, launched a range of energy drinks that taste as good as soft drinks and secured significant distribution for Carabao across the UK. It’s been a bonkers journey so far and we now need a campaign that brings it all together. SNAP are strategically and creatively brilliant and we are proud to have them as part of our team.”

SNAP added: “Thailand. Rock stars. Water buffalos. When we heard the backstory of Carabao, we put our pens down and smiled. We knew all we had to do was find a fun way to bring it to life.”